Hope, survival, and the American dream: "The Grapes of Wrath" opens at ACT 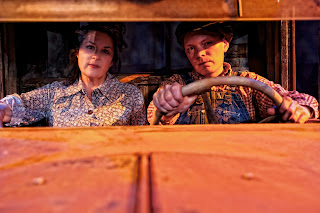 “I think there’s a misconception that drama means depressing,” says Managing Director Susan Harper. “The Grapes of Wrath is a drama – but one that’s full of music and laughter and warmth.  It’s also an engrossing look at a time and a place that feels surprisingly familiar to 2013 and is truly a testament to the triumph of the human spirit.”

John Steinbeck’s 1939 novel The Grapes of Wrath won the Pulitzer Prize and was quickly adapted into a film version which starred Henry Fonda as Tom Joad.  The book became an instant classic, and has remained a staple of reading lists for high school and college students.  In 1988, Frank Galati of Chicago’s famed Steppenwolf Theatre Company adapted Steinbeck’s novel into a stage version.  The original production of the adaptation won the Tony for Best Play in 1990.  Steinbeck found poetry in the language of the Oklahoma farmers, and Galati’s adaptation of The Grapes of Wrath remains true to the original novel – and thus includes strong language and imagery, including words and phrases that may be considered blasphemous.

Asheville Community Theatre’s production of The Grapes of Wrath is directed by Susan Dillard who has directed many area shows over the past several decades.  A stellar cast of 24 ACT newcomers and veterans is led by Jason Williams as Tom Joad, McRae Hilliard as Reverend Casy, and Teresa Darakjy as Ma Joad.

Another star of Asheville Community Theatre’s production is the 1923 International Harvester truck that was purchased and repurposed by Scenic Designer Rob Bowen and Technical Director Jillian Summers.

“It will be handled by the cast onstage using a caster system.  The truck will interact with the actors on stage and help them make the journey from Oklahoma to California.  They will ride in it, they will swing it around.  It is a character,” said Bowen. “It anchors the location and allows us to use lights and platforming to create the world in the mind of the audience.”

During the run of the show, Asheville Community Theatre will be collecting canned food donations for MANNA FoodBank.  MANNA FoodBank’s mission is to involve, educate, and unite people in the work of ending hunger in Western North Carolina, and Asheville Community Theatre is encouraging patrons to help those in need in our region by bringing a donation of canned goods to the theatre.

For more information about The Grapes of Wrath or about Asheville Community Theatre, please visit www.ashevilletheatre.org.
Posted by Asheville Chamber at 9:23 AM