What a crazy week it has been, both at the North Carolina General Assembly and around the country. The Chamber does want to send our thoughts and prayers out to all those affected in Massachusetts and Texas. You can see from the picture outside the NCGA that flags flew at half mast this week. 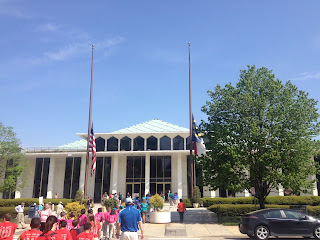 The NCGA reconvened on Monday, April 15 with the House passing the Asheville water legislation on a 72-39 vote. The legislation has now cleared the House and will head to the Senate. Legislation affecting Asheville continued into Tuesday with the Senate passing the Asheville ETJ bill (H224). This bill will take away the City of Asheville’s Extraterritorial Jurisdiction area in Buncombe County. H224 had already passed the House and was later ratified and became law on Wednesday.

The other hot topic of the week was H589 or VIVA (Voter Information Verification Act). This bill will require photo identification for North Carolina voters and has been the source of great debate among the parties. The bill cruised through committee with Republican support and can be expected to appear on the House floor as early as next week.

The Chamber is also closely watching several education bills. The House’s version of education reform (H719), which would change teacher tenure cruised through with massive bipartisan support (113-1). The Chamber has also strongly advocated for local school board control of spending and has been closely watching S373, which would allow for more local control of budgets. This bill passed out of the Senate Education Committee with a favorable report and is heading to Appropriations.

Finally, the Chamber was thrilled at the Governor’s transportation announcement on Thursday. It appears that there is support both from legislative leadership and the executive office to change how road money is distributed in the state. This has the possibility of allowing for the I-26 Corridor Project to be completed at a faster pace. The Chamber believes that the I-26 Corridor is critical for the success of WNC business, and to prove the point the Chamber will be hosting a forum on the issue.

The I-26 Corridor Summit will take place on Thursday, May 9 from 8:15 AM until noon at the NC Arboretum. You can learn more about the event and register here.

Please feel free to contact the Chamber’s Public Policy department at anytime with questions or concerns at jjoyce@ashevillechamber.org.