You have to admit, food writers and critics have pretty great jobs. Because let’s face it, who wouldn’t love regular invites to special dinners and wine tastings, and to be wooed by chocolate-flecked strip sirloin or filet tartar or any other delicious creation that was made to impress? Well, Asheville holds just the opportunity. 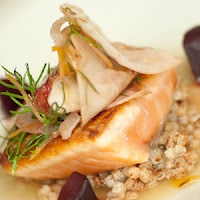 Now in its fourth year, the WNC Chefs Challenge is your chance to play food critic for a night. The cook-off pits 16 regional chefs against each other in a series of weekly battles for the title of Best Chef in WNC. And the best part, diners get to enjoy six courses prepared around a secret ingredient (three from each chef) and decide who wins. The tasting is blind and scorecards provide the judging criteria.

This year’s challenge is well underway, with a few surprises and upsets already narrowing the field. While most contenders are Asheville chefs, there are a few new challengers from father afield, including Chef Stuart Jensen of Stuart’s on the Green from Spruce Pine and Chef Michael Marshall of Harrah’s Cherokee Resort (competing April 9).

Tonight (April 2), Chef Graham Overal at The Blackbird takes on Chef Chuck Kegg at West Asheville Lounge & Kitchen (WALK). The challenges are held Tuesdays through May 7 at Chestnut restaurant (48 Biltmore Ave., Asheville). The quarterfinal round begins April 16, with the finals taking place during the Asheville Wine & Food Festival, August 22-24, 2013. Seating is 6-6:30 p.m., and tickets cost $68 (tax and gratuity included). For tickets and further details, including recaps from previous challenges, call (828) 575-2667 or visit www.ashevillewineandfood.com. Proceeds benefit Eliada, a 109-year-old nonprofit agency serving the Western North Carolina’s children and families.
Posted by Asheville Chamber at 11:20 AM