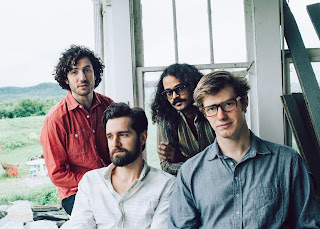 In the spotlight for its evocative hit “God Of Loss” – which made National Public Radio’s Best Songs of the Year in 2015 ­– and its incredible current album, Birds Say, Darlingside brings its eclectic style to Asheville Friday, October 7 at 8:00 p.m. as part of Diana Wortham Theatre’s Mainstage Series.

The young band’s star is clearly on the rise with abundant recent critical acclaim. In addition to the recognition on NPR’s Best Songs of the Year, “God of Loss” also won the band the title of NPR’s Larry Groce’s #1 Song of the Year. The band provided one of Mountain Stage’s Best Performances (2015) and was listed as the tenth best album on Folk Alley’s listeners’ poll.

After six years of playing together and a decade-plus of knowing each other, the band’s collaborative process has evolved into a patchwork of the artistic visions of four equally talented songwriters, a mash-up of their individual and collective experiences and dreams. Subtle musical shadings take cues from ‘60s folk, chamber pop, bluegrass, classical, and modern indie rock, all complemented by tones from the harmonium, frailing banjo, 12-string electric guitar, Wurlitzer, auto-chord organ, and grand piano.

The members of Darlingside met at Williams College in western Massachusetts and joined the same singing group. From there, the four bonded over a shared interest in songwriting, despite a diversity of musical backgrounds and performance styles including chamber music, choral singing, Celtic session playing, and street busking.

Seeing Darlingside live is like sitting in its living room. There are vestiges of rock in the band’s sound: electric guitar fuzz and ambient feedback creep into otherwise acoustic arrangements. But voices and melodies have shifted to the forefront. All members of the band sing, layering rich vocal overtones and intertwining harmonies with their respective instruments: Don Mitchell on guitar and banjo; Auyon Mukharji on violin and mandolin; Harris Paseltiner on cello and guitar; and David Senft on bass.

The entrance for the Diana Wortham Theatre is marked by the location of the theatre’s marquee between 12 and 14 Biltmore Avenue. Patrons enter the theatre through the breezeway between Marble Slab Creamery and White Duck Taco, and into a large interior courtyard with multiple glass doors which lead to the theatre’s lower lobby and box office. The intimate theatre seats just over 500 and boasts exceptional acoustics and sightlines, making it the premier performance space in Western North Carolina. The Mainstage Series is supported by a grant from the North Carolina Arts Council, a state agency. The Mainstage Series 2016/2017 Season Sponsors are 67 Biltmore Downtown Eatery & Catering, Asheville Citizen-Times, Blue Moon Water, Creative Energy, the North Carolina Arts Council, and the Renaissance Asheville Hotel. To obtain more information on the Mainstage Series or to purchase tickets, call the theatre’s box office at (828) 257-4530 or visit www.dwtheatre.com.
Posted by Asheville Chamber at 12:43 PM