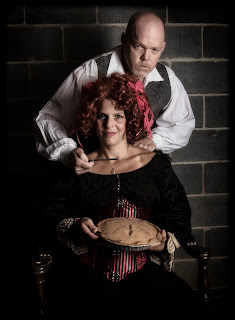 This production will be the first time ACT has produced Sweeney Todd. Director Jerry Crouch was thrilled to be asked to direct. “I grabbed the LP of Sweeney Todd the second it hit the record stores in 1979. I knew I was listening to Broadway history by then and still - arguably - the most famous Broadway composer, Stephen Sondheim,” said Crouch. “Sweeney Todd offers a delicious delights of high powered vocals and lower comedy. In between is some of the most beautiful music to ever grace a Broadway stage.”

“The mere mention of Sweeney Todd in England is what “The Boogeyman” is to American kids. He is meant to scare kids into better behavior,” said Crouch. “Massive research has never turned up any basis in fact for a “real Sweeney Todd” by that name or any other serial killer who slit the throats of his victims and used their flesh for meat pies.”

In the musical, the unjustly imprisoned Sweeney Todd returns to England bent on revenge against the corrupt judge who sentenced him – a revenge that turns indiscriminately murderous. He opens a popular new barber practice above a failing pie shop, and he meets the resourceful proprietress, Mrs. Lovett, who soon becomes his accomplice when she realizes that adding a new ingredient to her meat pies has the people of London lining up for more. This Tony Award-winning musical features one of Sondheim’s darkest and most intricate scores.

Jerry Crouch and Lenora Thom are the perfect team to helm Sweeney Todd. Over the years the partnership of Crouch and Thom have thrilled and entertained ACT and Asheville audiences to the show-stopping Broadway tunes of Annie, Fiddler on the Roof, Guys & Dolls, Annie Get Your Gun and Cabaret. They have clocked in over one hundred musical productions between them.

For Sweeney Todd, 78 actors auditioned and Crouch and Thom selected a cast of 34. About half of the cast is new to the ACT stage, including Steve Parkin who stars as Sweeney Todd. Parkin has a background in opera and theatre and describes this as his own "bucket list dream role." After starring in last season’s The Man Who Came to Dinner, Christy Montesdeoca is making her ACT musical debut as Mrs. Lovett.

Rehearsals for Sweeney Todd began in mid-August. Thom and Crouch agree that the secret to a successful musical is hitting the ground running with two solid weeks of music (under Thom's sharp eared tutelage) – and for Sweeney Todd, this includes the nine principals and the chorus of 25. When actors are free from those music intensives, Crouch is busy staging the songs and scenes in another part of the theatre.

AT A GLANCE
What: Sweeney Todd; Music and lyrics by Stephen Sondheim; Book by Hugh Wheeler; Based on an adaptation by Christopher Bond

Who: Directed by Jerry Crouch with musical direction by Lenora Thom

Posted by Asheville Chamber at 2:38 PM