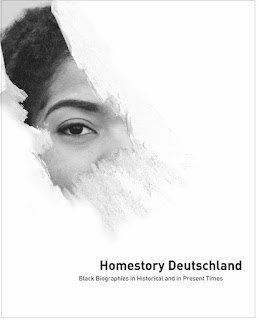 UNC Asheville will host an event series including an exhibition, film screenings and a lecture on the experience of Afro-Germans, The Spaces Between Us: Black Lives in Germany, from Sept. 21 – Oct. 12. The series will feature the work of Afro-German filmmaker Branwen Okpako, who will also present a lecture on campus. All events in this series are free and open to the public.

An exhibition of self-portraits and biographies of black Germans will open at 7 p.m. on Wednesday, Sept. 21 in the lobby of UNC Asheville’s Karpen Hall. The collection includes both historic and contemporary photos, and give voice to the complex and varied histories of Afro-Germans and their experiences of being black in Germany. The exhibit will remain on display through Oct. 6.

Nigerian-born filmmaker Branwen Okpako’s 2003 film, Valley of the Innocent, will be screened at 7 p.m. on Wednesday, Sept. 28 in the Grotto of UNC Asheville’s Highsmith Union. The film follows a woman’s journey to find her parents, which leads her to the dark secrets of Germany's suppressed history.

Okpako will visit UNC Asheville to present a lecture, Representing Ourselves: Afro-German Identities in the Films of Branwen Okpako, at 7 p.m. on Monday, Oct. 3 in Karpen Hall, Laurel Forum. Okpako’s talk will explore the relationship between image, culture and race from a working artist’s point of view.

Dirt for Dinner, an award-winning documentary by director Okpako, will be screened at 7 p.m. on Wednesday, Oct. 12 in the Grotto of UNC Asheville’s Highsmith Union. The film tells the story of Sam Njankouo Meffire, the son of a Cameroon father and East German mother who grew up to become a cop, a model citizen and, finally, a convicted criminal. The film won the Bavarian documentary film prize, the German Next-Generation-First-Steps Award for Best Documentary Film and First Prize at the Dubrovnik Documentary Film Festival in 2001.

For more information, contact Regine Criser, assistant professor of German at UNC Asheville, at rcriser@unca.edu or 828.232.2438.
Posted by Asheville Chamber at 2:44 PM