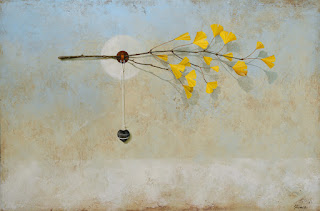 Visions of Nature, an exhibition featuring 10 new acrylic paintings from Santa Fe-based artist Brad Stroman, opens at Grovewood Gallery on Saturday, April 15, 2017. An opening reception, with the artist in attendance, will take place from 2 – 5pm (free and open to the public). Visions of Nature will remain on view through Sunday, May 21, 2017.

Brad Stroman’s work focuses on the small, incidental natural objects that we often pass over in our everyday activities – a crinkled leaf, a torn feather, an abandoned nest, a worn stone. He makes a conscious effort to honor the mundane and incidental and to capture the simple and understated beauty in nature.

Brad’s acrylic paintings contain exquisitely detailed renderings of these natural objects, usually trapped or otherwise held in place by something commonly created by man – a string, barbed wire, a piece of rusted iron tool. These objects, which have the illusion of being three-dimensional, are placed against a backdrop of beautifully balanced colors that have been textured and stained to create the appearance of a time worn surface. The natural and man-made items play out their balancing act on the painted stage.

A common element found in all of Brad’s paintings is a circle. “The circle has been and continues to be a very profound symbol for indigenous peoples around the world,” says Brad. “It stands for unity and harmony and because we seem to have lost a connection with nature that primitive cultures enjoyed, I deliberately break up or wear away the circle in the painting to show the disconnection we now have with nature.”

A recent move to Santa Fe, New Mexico has also influenced Brad’s latest body of work. He says, “It's been less than 2 years since I left Asheville for Santa Fe. My new environs have influenced my paintings with the intense colors of the Southwest - the dazzling reds and oranges, the adobe tans, and those luscious turquoise and sky blue hues.”

Brad’s nature-inspired paintings have garnered acclaim from environmentalists and art lovers alike. His work has been exhibited throughout the United States and can be found in nearly 100 private and corporate collections worldwide, including the permanent collection of the Cherokee Indian Hospital in Cherokee, North Carolina.
Posted by Asheville Chamber at 10:02 AM