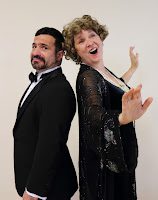 Based on the true story of Francis Foster Jenkins, a wealthy New York socialite with a famously uncertain sense of pitch and key. In 1932, she met mediocre pianist Cosmé McMoon, and the two teamed up in the hope of achieving success. Over the next dozen years, their bizarre partnership yielded hilariously off-key recitals that became the talk of New York, earned them cultish fame. The play culminates in a sold-out performance at Carnegie Hall in 1944, where the audience "turns on her in gales of derisive guffaws." This beautiful story pierces the heart of the hopeful artist that lives in all of us.

The play's title, Souvenir, comes from Jenkins insisting on recording "Queen of the Night" (Mozart), saying that when her voice is not as strong, the recording will make "a lovely souvenir."

The story was recently made into the movie, Florence Foster Jenkins, featuring Meryl Streep, Hugh Grant and Simon Helberg. The film was nominated for two Oscars at the 89th Academy Awards, including Best Actress for Streep and Best Costume Design.

Tickets are available by calling 828-239-0263 or visiting us online at ncstage.org
Posted by Asheville Chamber at 2:37 PM