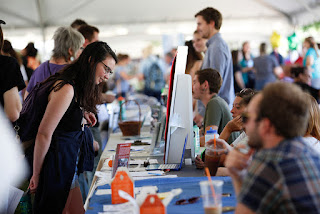 Visual artist, photographer and author Clarissa Sligh will give an artist’s talk at 4:30 p.m. on Friday, April 7 in the Ramsey Library Glasshouse. Themes of change, identity and the environment can be found in many of Sligh’s works. The author of numerous artist books, her most recent publication comes out of her installation for Speaking Volumes: Transforming Hate, a group exhibition which started in 2007, comprised of creating origami cranes from pages of white supremacist books. When Sligh was just 15 years old, she became the lead plaintiff in a 1955 school desegregation case in Virginia—an experience that influenced her art as well as her careers in science and mathematics at NASA and later in business. Sligh’s photo-text images, artist books and installations have exhibited in galleries and shows across the country.

Award-winning songwriter, speaker and writer David LaMotte will perform a free concert on the UNC Asheville Quad at 6:30 p.m. on Friday, April 7. LaMotte had suspended his 18-year music career at its peak in 2008 to pursue his other passion by accepting a Rotary World Peace Fellowship to study international relations, peace and conflict resolution at the University of Queensland in Brisbane, Australia. He is the author of three books, including two illustrated children’s books, and is a public speaker and workshop leader. LaMotte was named a “Madison World Changer” by his undergraduate alma mater, James Madison University.

Artist and lecturer David Hess works mostly with found materials, which he calls “rescued objects.” His current installation, Gun Show: An Art Exhibit, will be on display on the Reynolds Green from 11 a.m. – 4 p.m. on Saturday, April 8. The exhibition features 100 rifles made out of industrial materials and household objects, and is Hess’ response to recent gun violence in the United States. This show is an art exhibit and is not a gun show, or gun sale or trade event. Weapons may not be carried onto the UNC Asheville campus by anyone other than law enforcement personnel. Hess will also offer an artist’s talk from 9:45 – 10:40 a.m. in the Humanities Lecture Hall. Hess’ work can be found in numerous private and public collections around the country. 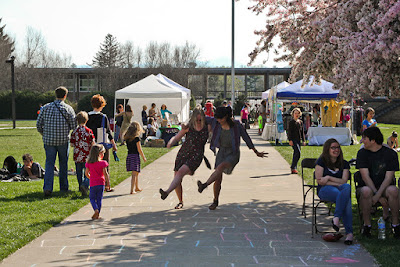 Friday, April 7
· 9:30 a.m. – 4 p.m., art hack event, in which participants will combine computer code with traditional art materials to co-create projects, and will combine code, cardboard and microcontrollers to develop survival-oriented materials. Activities will take place in the CrAFT Studio in the lower level of Ramsey Library.
· 2:30-4:30 p.m., Change the World Expo, with UNC Asheville students, faculty and staff displaying their work in the community in areas such as human rights, environment, health, children’s issues, elderly issues, technology, government and more. Tabling will take place on the Quad.
· 8:30-9:30 p.m., students in the music technology program will perform “space music” to accompany star viewing through telescopes on the Quad.

Arts Fest will culminate with a festival from 11 a.m. – 4 p.m. on Saturday, April 8, followed by film screenings at 6 p.m. in Humanities Lecture Hall. Various music and dance performances take the stage on the Reynolds Green, while art vendors display and sell their crafts. David Hess's interactive exhibit, Gun Show: An Art Exhibit will also be on display. Several science-related activities will be available, including a giant interactive camera obscura, and a presentation on the art of physics in Whitesides Hall.

Ongoing events taking place during Arts Fest include exhibitions such as Pioneering Voices: Portraits of Transgender People, an anagama kiln firing and TheatreUNCA’s co-production of Peter and the Starcatcher with Asheville Community Theatre.

For the full Arts Fest schedule and details, visit arts.unca.edu/arts-fest.
Posted by Asheville Chamber at 10:44 AM