The acclaimed traditional Irish music ensemble, The Maírtín O’Connor Trio, brings its vitality and dynamic musicianship to Diana Wortham Theatre, Saturday, April 1, 2017 at 8:00 p.m. Virtuoso accordion player Máirtín O’Connor has been dazzling audiences for over 30 years and is one of the most respected and best-loved musicians to emerge from Ireland. He is joined by superb fiddler and multi-All-Ireland champion, Cathal Hayden, and beloved session guitarist Patrick Doocey. Their performance at Diana Wortham Theatre is presented in partnership with The Swannanoa Gathering at Warren Wilson College. 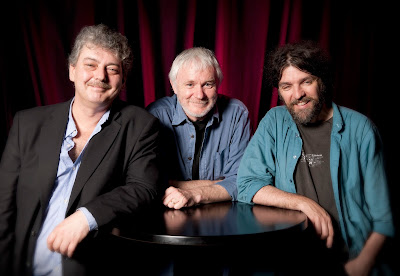 By combining the rich sounds of the accordion, fiddle, and guitar, these stalwarts of Irish music proudly display their own musical connections and tight rapport with one another.  Each musician contributes a style unique to the genre, honed by years of groundbreaking experience, making the trio one of the more versatile and dynamic groups on the Irish music scene. Called “Irish traditional music’s own ‘power trio’” by The Irish Echo, the group explores Irish music with sophisticated arrangements and elements of swing, bluegrass, and other contemporary styles while staying rooted in the tradition.

Born and raised in County Galway, Máirtín O’Connor began playing accordion at the age of nine, and has since quite simply gone where no Irish accordion player has gone before in his contribution to the genre and instrument as both a solo artist and group player. He is the 2015 Traditional Musician of the Year (TG4 Gradam Ceoil Awards –  the premier annual traditional Irish music awards) and his career includes recordings with Rod Stewart, Elvis Costello, Mark Knopfler, the Waterboys, Tanita Tikaram, Townes Van Zandt, and The Chieftains.

The entrance for the Diana Wortham Theatre is marked by the location of the theatre’s marquee between 12 and 14 Biltmore Avenue.  Patrons enter the theatre through the breezeway between Marble Slab Creamery and White Duck Taco, and into a large interior courtyard with multiple glass doors leading to the theatre’s lower lobby and box office. The intimate theatre seats just over 500 and boasts exceptional acoustics and sightlines, making it the premier performance space in Western North Carolina.  The Mainstage Series is supported by a grant from the North Carolina Arts Council, a state agency. The Mainstage Series 2016/2017 Season Sponsors are the Asheville Citizen-Times, Blue Moon Water, Creative Energy, 67 Biltmore Downtown Eatery & Catering, the North Carolina Arts Council, and the Renaissance Asheville Hotel.

To obtain more information on the Mainstage Series or to purchase tickets for the April 1, 2017 performance of the Maírtín O’Connor Trio at the Diana Wortham Theatre (Regular $32; Student $27; Child $20; Student Rush day-of-the-show (with valid ID) $10, call the Theatre’s box office at (828) 257-4530 or visit www.dwtheatre.com.

Posted by Asheville Chamber at 10:57 AM