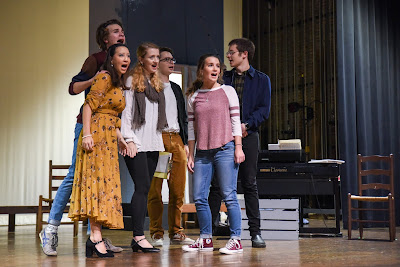 In October, Asheville School students will transform into The Harbor Island Players, a community theatre group who are delighted when a down-on-his-luck professional actor agrees to direct and star in their musical adaptation of Chekhov's "Seagull."

This play-within-a-play promises to entertain—it has comedy, drama, tenderness and wit and comes from the minds of David Evans and the book writer for the popular Broadway show "Wicked," Winnie Holzman.

According to the production synopsis, "As [the Harbor Island Players] rehearse, their egos and passions start to mirror the characters in the play. The approach of opening night drives everyone into a fever pitch until a sudden plot twist makes them all reevaluate their choices, both onstage and in life."

According to Asheville School Director of Music and Drama John Crawley, "Birds of Paradise" is a fantastic show that allows for a showcase of students' talent. "I chose this musical because it has an awesome script and score, it is little known, and it is a great ensemble piece for our eight actors," he said. "Our kids are having a blast putting it together."

"Birds of Paradise" will show in the Walker Arts Center's Graham Theater. It will premiere at 7:15 p.m. on October 19 and 20, followed by a matinee performance at 2 p.m. on October 21.

Crawley says that it will be of particular interest to those in Asheville interested in local theatre. "I hope we will entice local theatre folks to come see the show because it hasn't been done in Asheville," he said. "It is worthy of being on community theatre's radar—we hope to see people there!"

Directions to Asheville School are here<https://www.ashevilleschool.org/about/directions>. No tickets or reservations are needed, and the show is free and open to the public.

Posted by Asheville Chamber at 9:10 AM