RED, Tony Award-Winning play by John Logan, opens in 35below 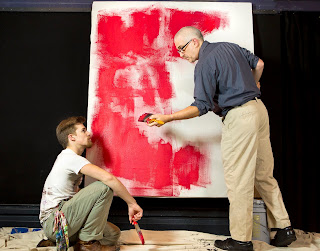 Mockingbird Theatre Productions in association with Asheville Community Theatre is excited to bring RED to Asheville’s 35below for the first three weekends in November. RED will be performed November 3 - November 19, 2017 with performances Friday and Saturday evenings at 7:30 pm and Sunday afternoons at 2:30 pm. Tickets are available online at www.ashevilletheatre.org, over the phone at 828-254-1320, or in person at the Asheville Community Theatre Box Office.

Winner of six Tony awards including Best Play in 2010, RED was written by playwright John Logan. A multi-award winning writer in theatre and film, Logan collaborated with the famous Donmar Warehouse for the original staging of RED in London.

Set in New York City in 1959, RED is an explosive exploration of the creative process. The play takes place during a crucial moment in the career of renowned Abstract-Expressionist artist Mark Rothko as he prepares for his greatest commission, a series of murals in New York’s prestigious Four Seasons restaurant. A two-person show, RED reveals Rothko and his assistant Ken as Rothko struggles to fulfill his vision of creating a sacred space for his deeply emotional paintings in the temple of “status and conspicuous consumption” that is the Four Seasons. What follows is a series of clashes between the fiery and domineering Rothko and his young, impressionable assistant. As the explosive interaction between the two escalates, the audience learns of the famous painter’s artistic vision as well as his battle with the New York art world and his own inner demons. Seemingly a blank slate, assistant and budding artist Ken reveals a devastating secret in his life, as he pushes back against Rothko’s controlling nature.

This production features Asheville veteran actor John Hall as Mark Rothko, and rising star Alex Daly as the painter’s assistant Ken. RED is helmed by Chanda Calentine who directed both Hall and Daly in ACT’s hit Peter and the Starcatcher last spring at UNCA’s Belk Theatre. Hall and Calentine chose RED for 35below’s 2017-2018 season, and were both gripped by the play’s thrilling word-play and deep emotional core. “The painter Mark Rothko was a true revolutionary,” says Hall, “creating a uniquely original as well as highly emotional and spiritual painting process. He truly believed art could save humanity.” By beginning the play as Rothko is preparing his murals for the Four Seasons restaurant, the playwright is putting the audience right in the painter’s studio during the creative process. Director Calentine adds, “Both characters have been scarred by life, but have chosen to deal with these wounds in very different ways. Their interaction in the painter’s studio, in the midst of creating art, is riveting.”

Posted by Asheville Chamber at 9:25 AM