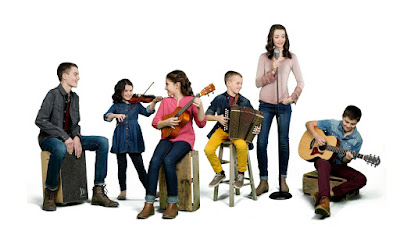 In a performance that is sure to entertain and uplift audiences of all ages, the six sibling step-dancers and musicians of The Next Generation Leahy light up the Diana Wortham Theatre stage with high-energy music, singing, and dancing, Friday, November 3 at 8:00 p.m.

The six children who comprise The Next Generation Leahy are turning heads with their dynamic performances, passion for their family music traditions, and unbelievable talent. Led by Doug Leahy – from the well-known Canadian musical family that has delighted DWT audiences in past seasons – and his wife Jennifer, the group builds on over three generations of Leahy musicianship, keeping those traditions alive through music, song and dance.

It is obvious from the first note that these children feel the music pulsing through their veins. With singing, French-Canadian step-dancing, fiddle, cello, French accordion and piano, each performance is as unique as the children themselves. This rare talent in children so young is an inspiration to other children and families alike, showing just what young people are capable of.

The Next Generation Leahy are:
Adele is the eldest of the group. At 13 years old she plays fiddle, cello and piano, as well as step dances and sings. When not performing, she can be found in the kitchen baking and creating new recipes to share with her family.

Gregory is the accordion player for the band, but also contributes his fiddling, piano playing, dancing and singing. He also loves to work with his hands. He can build and fix just about anything at only 12 years old!

Angus, at 10, is already an accomplished fiddler, pianist, step dancer, and vocalist. He is the athlete in the family, and he loves sports almost as much as he loves music. He cheers for the Pittsburgh Penguins hockey team, and his favorite player is their captain, Canadian Sidney Crosby.

Cecilia shares with her siblings an amazing aptitude for fiddle, piano, step dancing and singing. At only 8 years old, she is also known as a card shark. She loves the game Euchre, the color blue, and cheesecake.

Joseph, age 7, shares his passion for fiddling, piano playing, step dancing, and singing with contagious energy. Despite being the youngest of the boys, he can often be found farming with his dad at any hour of the day. He enjoys cards, math, and cheering for the Pittsburgh Penguins with his older brother.

Evelyn, only 5 years old, is already composing “tunes” on the piano. She also loves to dance and is always coming up with new steps. Her favorite colors are purple and pink, and she never passes up a juicy slice of watermelon.