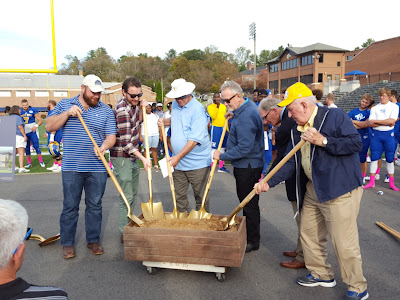 Mars Hill University held a ceremonial groundbreaking for a major new addition to its athletics facilities following the Homecoming football game on Saturday, October 21, 2017. The Jo Ellen Ammons Athletic Field House will sit at the south end of Meares Stadium, at the corner of Athletic Street and NC 213. Construction is scheduled to begin in November, with the building expected to open for use in December 2018.

The field house will be named in memory of Jo Ellen Ammons, a longtime supporter of Mars Hill University and its student-athletes, thanks to a generous lead gift from her husband, Jud, a former university trustee. The Ammonses also are the benefactors and namesakes of the Jud and Jo Ellen Ammons Family Athletic Center, which encompasses the entire stadium facility, and was dedicated in 2007. 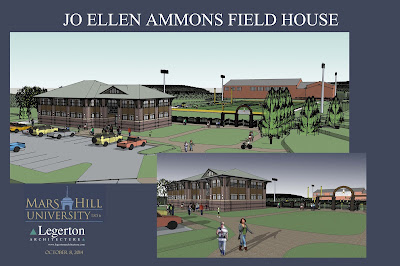 The field house will address a longtime space issue for the university's athletics program. For decades most sports were housed in Chambers Gymnasium. But that facility was built in the late 1960s, when Mars Hill fielded only eight intercollegiate teams. Now there are 22. As new sports were added, the available space became crowded, eventually forcing the university to situate coaches and other athletics staff in buildings across campus, far from their training, practice, and playing facilities.

Head football coach Tim Clifton says news of the Ammons Field house is generating excitement among coaches and players: "This facility will provide us the opportunity to become more competitive in multiple areas, specifically recruiting." The field house, and renovations to Chambers Gym that will happen after office and training space is freed up, will provide the necessary space to train and prepare competitors, while also conveying to recruits and their families that Mars Hill supports the student-athlete experience. Completion of this project will enable Mars Hill to achieve competitive balance in athletic facilities with its NCAA Division II peers.

Posted by Asheville Chamber at 1:29 PM