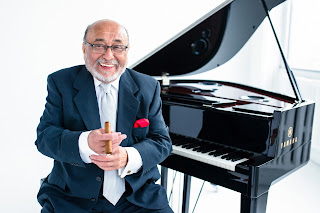 Known as one of the finest pianists of the past 60 years, ten-time Grammy-award-winning musician Eddie Palmieri and his band light up the Diana Wortham Theatre stage with swinging Latin jazz, Friday, October 20 at 8:00 p.m. on his Eddie at 80 tour.

A National Endowment for the Arts Jazz Master, Palmieri is known worldwide for skillfully melding complex jazz harmonies with the beats of his Puerto Rican heritage and other Afro-Latin and Afro-Caribbean musical styles. A brilliant player and performer, Palmieri skillfully fuses Puerto Rican rhythms with the complexity of his many jazz influences: Thelonious Monk, Herbie Hancock, McCoy Tyner, and even his older brother, Charlie Palmieri.

Palmieri’s professional career as a pianist took off with various bands in the early 1950s. During this time he collaborated with well-known trumpeter Eddie Forrester, and he played in Johnny Segui’s band and the popular Tito Rodriguez Orchestra. In 1961, Palmieri formed his own band, La Perfecta, which featured an unconventional front line of trombones rather than the trumpets customary in Latin orchestras. This created an innovative sound that mixed American jazz into Afro-Caribbean rhythms, surprising critics and fans alike, and launching his rise into jazz stardom.

In addition to ten Grammys, Palmieri has received a host of other awards and recognitions over his career. In 1998, he was named an American icon by the Smithsonian’s National Museum of American History, and was chosen to record two of his performances to be preserved in its archives. Other achievements include the Eubie Blake Award (1991) and Most Exciting Latin Performance, presented by the BBC in London (2002). Also in 2002, Palmieri was recognized for his work building communities through music by the prestigious Yale University’s Chubb Fellowship. He received the Harlem Renaissance Award (2005) and Jay McShann Lifetime Achievement Award (2008), and was inducted into the Oklahoma Jazz Hall of Fame (2008).

In 2013, Eddie Palmieri received the coveted Jazz Master award by the National Endowment of the Arts (NEA). The NEA Jazz Master award is the highest honor an American Jazz artist can receive. He continues to share his music widely, preserving the traditions from which he came while continuing to push boundaries to create something original and awe-inspiring.