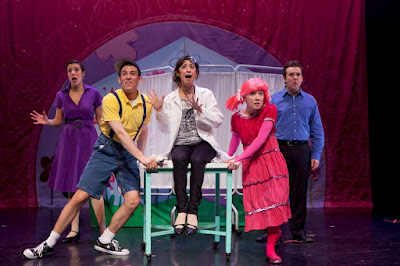 In Pinkalicious The Musical, Pinkalicious can't stop eating pink cupcakes despite warnings from her parents. Her pink indulgence lands her at the doctor's office with Pinkititis, an affliction that turns her pink from head to toe — a dream come true for this pink loving enthusiast. But when her hue goes too far, only Pinkalicious can figure out a way to get out of this predicament.

“The 6:00 p.m. show allows families the opportunity to attend a performance together,” says Rae Geoffrey, Managing Director of Diana Wortham Theatre. “This is a special event to make your little ones feel like royalty: attending the theatre, watching a book come to life. There are lots of great messages about family, love and listening to your parents in the play.”

Pinkalicious is recommended for Grades K–3, but guests as young as age two are welcome. For the 6:00 p.m. performance, kids are encouraged to dress in their best pink-errific outfit and enjoy a cupcake (pink of course!) with the cast at a post-show Pink Party in the lobby.

The #1 New York Times-bestselling children’s Pinkalicious picture book series has sold more than 22 million copies in all formats. It has been translated into eight languages and is sold in nine countries. Elizabeth Kann & Victoria Kann, sisters who grew up in Brooklyn, are the original co-authors of Pinkalicious (HarperCollins, 2006) and Purplicious (HarperCollins, 2007), which Victoria also illustrated. John Gregor wrote the music, and he, Elizabeth and Victoria wrote the lyrics.

To obtain more information on the Mainstage Series or to purchase tickets for the October 11, 2017 performances of Pinkalicious The Musical, call the theatre’s box office at (828) 257-4530 or visit www.dwtheatre.com.
Posted by Asheville Chamber at 8:59 AM