This week, the North Carolina Housing Coalition (NCHC) honored two individuals who have gone above and beyond the call of duty to help ensure North Carolinians have a safe and decent place to call home. 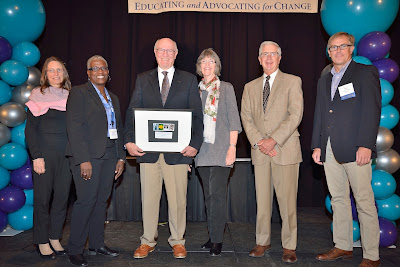 
Pat Garrett served as President of The Charlotte-Mecklenburg Housing Partnership for 23-years, retiring in 2013. Since then, Pat has remained dedicated to meeting the housing needs of low and moderate income North Carolinians by serving as a Board Member of the NC Housing Finance Agency. The Housing Partnership is a broad-based, private, nonprofit housing development and financial corporation organized to expand affordable and well-maintained housing within stable neighborhoods for low and moderate-income families in the City of Charlotte and Mecklenburg County. Since its creation in 1987, The Housing Partnership has financed the preservation and development of nearly 2,300 rental homes, creating over 2,500 new homeowners and revitalizing six neighborhoods housing units.


Under her leadership, The Housing Partnership led the revitalization of inner-city neighborhoods such as Greenville, Genesis Park, Druid Hills, Park at Oaklawn (formerly Fairview Homes) and Double Oaks. In 2007, the organization created its Homeownership Center of Charlotte, which provides financial self-sufficiency education for more families, including helping individuals and families become homeowners. Since retiring, Pat has continued to serve as a Board member of the NC Housing Finance Agency, a self-supporting public agency, whose mission is to create affordable housing opportunities for North Carolinians whose needs are not met by the market.


In recognition of his devotion and commitment to improving housing conditions for low-income families through volunteer commitment and sacrifice, NCHC presented the Sister Barbara Sullivan Award to Spencer Duin. Spencer has been an extraordinary volunteer and advocate for AAHH since 2001, when he was employed with the Eaton Corporation. He has served as a jobsite volunteer, a member of the AAHH Board of Directors, Finance Committee, Golf Tournament Committee and Fund Development Committee, and on a work team to New Orleans in 2007. Spencer also chaired the $5 million Building a Way Home Campaign. This campaign provided enough land for 9 years of building, expanded AAHH’s ReStore and launched a Home Repair program that annually assists 40 community homeowners.


Outside of AAHH, Spencer serves on the North Dakota State University Foundation Board and chairs their Investment Committee. He also volunteered as an assistant in the math program at the French Broad River Academy. He and his wife Carol are active members of their local faith community and Building Bridges of Asheville, NC, and have a long history as foster care parents.


“Each of these leaders is a tremendous example of the great network of organizations and individuals who are working hard every day to produce more quality affordable housing in NC,” said Satana Deberry, NCHC Executive Director. “We need our political leaders to recognize the great work that is happening in affordable housing and provide more resources and governmental support so that everyone in NC can achieve an affordable place to live.  If we are going to remain a state with a great quality of life, planning for superior affordable housing near where people work and shop will be vital.  Each of these folks recognized today represent the work we need to build on if we are to make this a reality.”


The annual NC Affordable Housing Conference was jointly sponsored by NCHC, Community Investment Corporation of the Carolinas (CICCAR), a subsidiary of the NC Bankers Association, and the North Carolina Housing Finance Agency. Over 800 people attended the conference from across the state including housing advocates, bankers, for-profit and nonprofit developers, community development corporations, local and state government officials and others from the many businesses and organizations that finance, build, and operate affordable housing in NC.
Posted by Asheville Chamber at 8:53 AM