Asheville Gallery of Art’s March show, “New Horizons,” will feature the work of artists, Anne Bonnyman, Cathyann Burgess, and Johnnie Stanfield. This will be the first show in AGA’s new gallery at 82 Patton Avenue. The diverse themes represented by these three new members highlight the range of work found at AGA, Asheville’s longest-established downtown gallery. 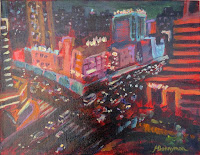 Anne Bonnyman paints natural and urban landscapes using oils and acrylics. She has lived in the Southeastern US, the Mid-Atlantic, and New England, where she says she has “discovered new landscapes to celebrate through color on canvas.” She now lives in Asheville and continues to explore the worlds of light, line, and color, as well as the narrative possibilities for painting from contemporary images and experience.

Cathyann Burgess states her goals as a painter have always been to convey her direct experiences with people, places or things that have been illuminated in a certain way. “Light on form is what grabs me,” she says. Her response to forms is deeply felt and she believes painting best tells her story. “I want the viewer to feel a sense of peace with the inquiry, inviting him or her to escape the noisiness of our real world. If that happens, I am pleased because then I have shared my world view as if in conversation,” Burgess says. 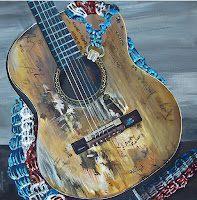 Johnnie Stanfield just recently emerged back on the art scene after a serious injury to her right hand that kept her from painting for more than five years. The injury also prompted her to return to the classroom, where she pursued a degree as a graphic designer and took on photography, which she claims is an old passion of hers. She has won various awards for her painting and drawings over the years. The artist states, “I am looking forward to being a part of AGA’s next phase as we move into our new gallery.”

“New Horizons” runs from March 1 through March 31. The public is cordially invited to meet the artists at a reception on Friday, March 4, from 5 to 8 p.m. Their work, and that of the other 27 gallery members, will be on display and for sale through the month during regular hours, Monday through Saturday, 11 a.m. to 6 p.m. The gallery is located at 82 Patton Avenue in Asheville, across from Pritchard Park.

Posted by Asheville Chamber at 10:13 AM