One of the stars of the opera world makes her Asheville Symphony debut Saturday, April 16 in a performance of Verdi’s Requiem, the highlight of the ASO’s sixth Masterworks concert of the season. 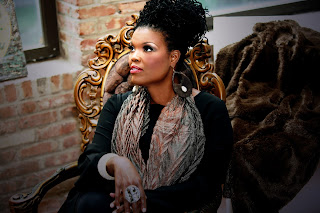 Angela Brown, who has received rave reviews for her performances on the Metropolitan Opera stage, joins the ASO, Asheville Symphony Chorus, and Music Director Daniel Meyer for the concert, which begins at 8 p.m. in Thomas Wolfe Auditorium. Brown was originally scheduled to make her Asheville debut on the symphony’s opening night in September 2015, but was forced to cancel due to illness.

In her stellar career Angela Brown has performed with dozens of opera companies, classical and pops orchestras, and in recitals around the world. While opera is the main catalyst for her career, Brown’s performance career includes everything from star hostess on stage, to producer and creator of the witty and inspired “Opera…from a Sistah’s Point of View,” a trailblazing educational show that dispels the common myths of opera from Brown’s own sassy perspective, and has gained international notoriety for bringing opera to the masses.

“This program commemorates the ways in which music, in the face of tragedy can soothe the soul and uplift the spirit,” says ASO Music Director Daniel Meyer. “Verdi’s Requiem, based on the Latin text from the Requiem Mass, is replete with the qualities you expect from Italy’s most celebrated composer—soaring, memorable melodies, powerful sonics, and an indelibly Romantic spirit.”

The concert will open with the heartbreaking Memorial to Lidice, by Czech composer Martinů. He wrote the piece upon hearing of the massacre of every man in the tiny Czech town of Lidice at the hand of the Nazis in World War II.

“This touching piece as an elegy to the souls who lost their lives in this brutal event,” says Meyer.