The Asheville Symphony and leading musicians from Asheville’s music scene—including Lizz Wright, Free Planet Radio, Rising Appalachia and Steep Canyon Rangers—have collaborated on an innovative new album to be released in May 2016.

Celebrating the diversity of music in Western North Carolina, The Asheville Symphony Sessions features songs that combine the unique styles of locally based musicians, with the Asheville Symphony. The album was produced by Michael Selverne of Welcome to Mars, at Asheville’s Echo Mountain Recording Studios. 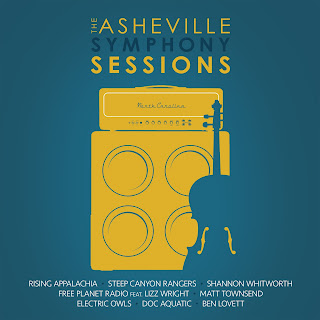 “This album serves as a soundtrack for the city,” says ASO Executive Director David Whitehill. “The Asheville Symphony champions great music, and we’re very fortunate that there is great music being made here. Not many communities of this size have the kind of resources—including the symphony musicians, recording engineers, producers, publicists, arrangers, session musicians and recording studios—that we have in Asheville.”

“This album is life-sized art, produced here in our community.  After 32 years of making records in NY and LA, this is one of the coolest projects I have worked on,” says producer Michael Selverne. “Working together, I believe that we have created an incredibly musical record that reflects the spirit and the soul of our community.”

A number of notable arrangers worked on the project including Michael Bearden, who works with Lady Gaga and Neil Young and was Michael Jackson’s musical director for the This Is It tour; Van Dyke Parks, who composed and arranged the score for Disney’s The Jungle Book (1967) animated film and composed Smile with Brian Wilson and the Beach Boys; and Jonathan Sacks, a composer and orchestrator who has worked on many blockbuster films including The Princess and the Frog (2009), Disney’s Cars (2006), and Seabiscuit (2003).

“It was amazing to see the bands’ reactions as they heard the symphony musicians bring the orchestral arrangements of their songs to life. This project is the collaborative effort of more than 150 people coming together to create something that is uniquely Asheville,” says Jessica Tomasin, Echo Mountain Recording’s studio manager. “I love the idea that we are connecting musicians from varying backgrounds and musical genres in our own community.”

The Asheville Symphony Sessions will be available through a variety of points of sale, including a number of local retailers, and worldwide through iTunes and Amazon.com. Visit ashevillesymphony.org/sessions for more information.

Posted by Asheville Chamber at 11:08 AM