“The Next Stage” campaign will raise the final $300,000 towards the $3.1 million goal
for the addition of two new venues plus improvements to the main theatre

On February 15, 2017, Diana Wortham Theatre announced its public campaign, The Next Stage, to raise the final $300,000 of its $3.1 million capital campaign goal to transform into a facility with three distinct performance venues.

According to Diana Wortham Theatre Board President Hardy Holland, “We are asking the community to invest in this campaign to transform not only our physical campus into a center for the performing arts, but also to expand the way we reach new and existing audiences. Through major gifts, The Next Stage has already raised $2.8 million of the $3.1 million towards our goal of energizing performing and cultural arts in Asheville with an expanded three-venue facility.”

The theatre’s Managing Director John Ellis explains, “Over the past 25 years, Diana Wortham Theatre has become an anchor for the vibrant cultural life that characterizes our region, hosting 200 public events with record-breaking attendance exceeding 55,000 each year. With demand so high, our community, performing artists, patrons and youth are ready for The Next Stage. In addition to the build-out of the new black box Forum Theatre, and the new flexible, multi-use Studio Theatre, all within the same complex, the campaign will fund a refurbished main theatre, the Diana Wortham Theatre, and enhanced amenities and patron services throughout the complex.”
Local architecture firm Clark Nexsen is engaged with the project.  While some elements of the project will be implemented this year, major construction is slated to begin by the end of 2017. The Next Stage includes: 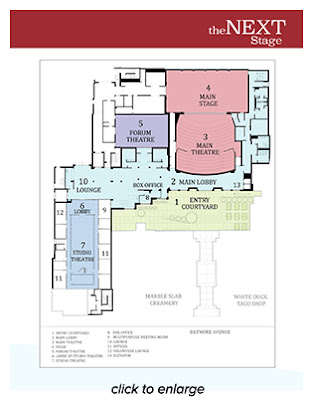 Active day and night, this center for the performing arts will bring artists, students and audiences together in a supportive environment to experience, learn and celebrate creative expression through performance.

Current Associate Director Rae Geoffrey, who will lead the theatre as its new Managing Director effective July 1, 2017 following John Ellis’s retirement this summer, invites the community to visualize exactly what The Next Stage will mean upon completion. “Imagine entering the newly expanded center for the performing arts through its redesigned courtyard entrance and lobby. On a given evening there could be three very different events, in the three different venues, at different price points and for different audiences: from dance performances to innovative new theatre works to intimate chamber or jazz ensembles to community workshops and classes, all under one roof,” says Geoffrey.

Though already serving approximately 10,000 children each year, completion of The Next Stage campaign will allow the theatre to increase the total number of events for children and families by 250% to 75 events and increase total audience attendance by 60% to more than 80,000 patrons of all ages.

For more information or to make a donation or pledge to The Next Stage, contact the theatre’s Resource Development Director, Kathy Jackson at 828-210-9849 or kathy@dwtheatre.com.

Posted by Asheville Chamber at 3:36 PM