UNC Asheville’s Center for Jewish Studies (CJS) will celebrate its 35th anniversary with a series of special events on and off campus March 23-26. The celebration will begin with an evening of literature, film and reflection, continue with an on-campus presentation by Israeli writer and recording artist Danny Maseng, and culminate in a concert by Maseng at Isis Restaurant and Music Hall in West Asheville.

Established in 1982, the CJS has brought some of world Jewry’s leading thinkers, writers, musicians and artists to Asheville. The CJS also coordinates UNC Asheville’s course offerings in Jewish studies, and stages community events bringing people together across religious and cultural boundaries.

UNC Asheville Professor of English Richard Chess has been director of the CJS for the past 25 years and will deliver the 2017 Phyllis Freed Sollod Memorial Lecture on the celebration’s opening night. A poet and essayist, Chess will offer a vision of Jewish culture as suggested by internationally acclaimed poets and writers who have been hosted by the CJS, including Yehuda Amichai, Rodger Kamenetz, Jacqueline Osherow, Shirley Kaufman, Peter Cole and Robin Becker. Chess also will read briefly from his forthcoming book, Love Nailed to the Doorpost, slated to be published in March. The evening also will include a short film on the history of the CJS by Marty Gillen and a dessert reception. This event is free and open to the public at 7 p.m. on Thursday, March 23, in UNC Asheville’s Reuter Center. 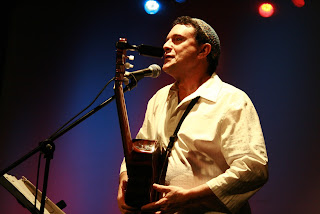 The celebration will continue with two events featuring Danny Maseng, who rose to stardom at a young age as a musician and on Israeli television and then arrived in the U.S. in 1971 under the patronage of Israel’s Prime Minister Golda Meir to star in a Broadway musical, Only Fools are Sad. He has gone on to record a dozen albums, stage a critically acclaimed one-man show that had a long off-Broadway run and toured internationally, and he has guest-starred in many TV shows. He is also a spiritual leader and cantor, supporting the arts in the Jewish community.

Maseng will present The Passion, the Beauty, the Heartbreak: Israel through Poetry and Music at 3 p.m. on Friday, March 24 at the Reuter Center. This presentation is free and open to everyone.

Maseng will then perform a concert of inspirational music from Jewish and world traditions on the main stage at Isis Restaurant and Music Hall, 743 Haywood Rd. in Asheville, at 7:30 p.m. on Sunday, March 26. Tickets are $15 with food and beverages additional. For dinner reservations and/or tickets, call 828.575.2737 or visit isisasheville.com.

For more information on the CJS and the 35th anniversary celebration, visit cjs.unca.edu.
Posted by Asheville Chamber at 1:01 PM