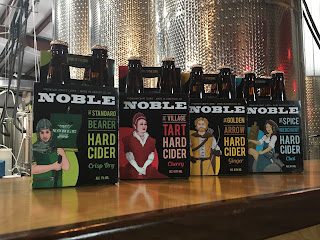 Noble Cider is pleased to announce that it’s four flagship cider varieties will now be available in 12 ounce bottle four packs. ‘The Standard Bearer’ (crisp dry), ‘The Village Tart’ (cherry), ‘The Spice Merchant’ (chai) and ‘The Golden Arrow’ (ginger) can be found direct to consumers and to our partner distributers in early March.

“Since the beginning of the company, one of our biggest requests from our customers has been to make our product available in bottles,” said Co-Owner and General Manager, Trevor Baker. “We listened and released the 500 mL bottles last year. Now with the 12 ounce bottle size, more outlets will carry our ciders and our fans will be able to find them in more places.”

The company continues to partner with Dena Rutter Design for flavor character development, label design, and now the new 4-pack cardboard carriers. Consumers can expect to see the continued bold colors and fun Noble characters throughout the new packaging.

Noble Cider entered the market in 2013 with 2000 gallons (63.5 barrels, 7570 liters) of their signature off-dry “Standard Bearer” cider available only on tap at Asheville bars and restaurants. In 2016, Noble produced over 50,000 gallons (1,587.0 barrels, 189,270 liters) of cider, in more than 20 different taste profiles, available in kegs, growlers, 500 mL bottles and in their Taproom. Noble products are currently available across North Carolina, Middle Tennessee, and South Carolina, with expansion into other states expected by the year’s end.

Baker adds, “When we began, our plan was to meet local Asheville consumer demand at the tap, alongside the area’s beloved craft beer. Now that cider continues to capture more of the beverage market share in retail, moving to 12 ounce bottles makes sense for our growth.”

Noble Cider’s growth mirrors that of the craft hard cider industry. Currently at about 1% of the beer retail sales, experts predict a 15% growth rate over the next 5 years, bringing cider to 2% of beer sales by 2020.  Smaller local and regional cider companies are leading the growth in the industry, with an average of 48% growth in 2016.

About Noble Cider: Our mission at Noble Cider is to craft premium hard ciders from fresh pressed apples. No artificial flavors or colors. 100% all natural and gluten-free. Noble Cider can be found across NC, SC and Middle TN. Noble Cider is True to the Core!  www.noblecider.com
Posted by Asheville Chamber at 3:23 PM