When the play "Cinderella" opens on Thursday, it will be the premiere performance in Mars Hill University's new Thomas Black Box Theatre. The black box theatre is in Day Hall, which opened last fall, providing classroom and office space, as well as enhanced facilities for the university's theatre arts program. The black box theatre is designed as a versatile theatre instruction space and for productions not requiring the full complement of stage facilities of the larger, adjacent, Owen Theatre.

"Cinderella" was written by Charlotte Chorpenning and is produced by Mars Hill's theatre arts department, under the direction of Joel Rogers. Performances are February 23 through 25 at 7:30 p.m. and February 26 at 2:30 p.m. Tickets are $10 for adults and $5 for children under age 12. Mars Hill University students are admitted for free, and there are special rates for university faculty and staff. Contact the box office at (828) 689-1239 for ticket information. 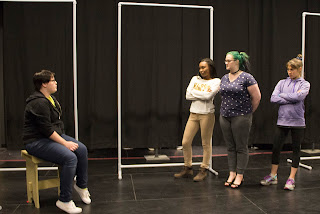 The black box theatre is named in honor of James "T" Thomas, a longtime member of Mars Hill's theatre faculty. Beginning in 1962, Thomas served the institution in numerous roles as a professor, designer, director actor, and department and division chair. In 1975, Thomas, with the help of other faculty and students, created the Southern Appalachian Repertory Theatre (SART) and became its founding director. From then until his retirement in 2000, he served as artistic director and acted in and directed many plays for SART.

Posted by Asheville Chamber at 3:12 PM