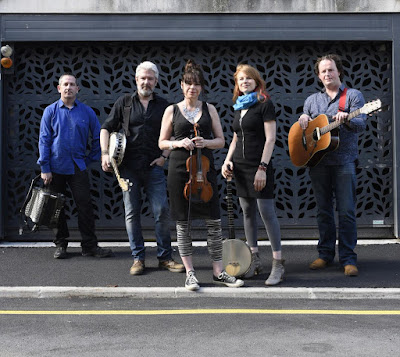 Celtic supergroup Solas kicks off Diana Wortham Theatre’s 2017 Mainstage Celtic Series with their unique blend of traditional music on Saturday, February 25 at 8:00 p.m. The Celtic Series is presented in partnership with The Swannanoa Gathering at Warren Wilson College.

Called “Irish America’s most influential band” (NPR’s The Thistle and Shamrock), Solas brings their seamless blend of Celtic-Americana-Folk in a highly anticipated concert. Formed in 1996, 2016 marked the 20th anniversary of Solas, but after recording twelve albums, winning numerous awards, and touring countless miles around the world, the band has decided that their current tour, ending this March 2017, will be their last for a while so that the band members can rest and pursue other projects.

Gaelic for “light,” Solas burst onto the Irish music scene and instantly rose to the top of the genre for their driving tunes and evocative singing. Solas is marking their 20th anniversary and final tour with a new recording project, All These Years.

Anchored by founding members Seamus Egan (flute, tenor banjo, mandolin, whistles, guitars, bodhran) and Winifred Horan (violins, vocals), and with longtime members Eamon McElholm (guitars, keyboards, vocals) and Mick McAuley (button accordion, vocals) and newest member, singer Moira Smiley, Solas continues to be the standard bearer not only for great Irish music, but great music in any genre. From their early days with singer Karan Casey and guitarist John Doyle, to the present lineup, Solas demonstrates the evolution of a band the Boston Globe declared to be “the finest Celtic ensemble this country has ever produced.”

Additional upcoming concerts in the Mainstage Celtic Series include:

The entrance for the Diana Wortham Theatre is marked by the location of the theatre’s marquee between 12 and 14 Biltmore Avenue. Patrons enter the theatre through the breezeway between Marble Slab Creamery and White Duck Taco, and into a large interior courtyard with multiple glass doors, which lead to the theatre’s lower lobby and box office. The intimate theatre seats just over 500 and boasts exceptional acoustics and sightlines making it the premier performance space in Western North Carolina. The Mainstage Series is supported by a grant from the North Carolina Arts Council, a state agency. The Mainstage Series 2016/2017 Season Sponsors are the Asheville Citizen-Times, Blue Moon Water, Creative Energy, 67 Biltmore Downtown Eatery & Catering, the North Carolina Arts Council, and the Renaissance Asheville Hotel. To obtain more information on the Mainstage Series or to purchase tickets, call the theatre’s box office at (828) 257-4530 or visit www.dwtheatre.com.