Asheville VeganFest takes a bite out of downtown in June 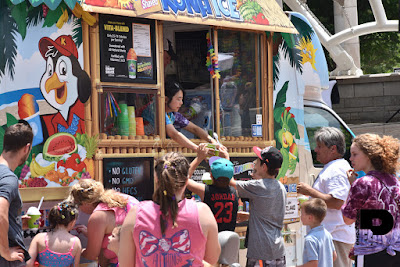 Asheville VeganFest expects 10,000 visitors to gather downtown this June in celebration of a plant-based lifestyle and compassionate living.

“Asheville has been named one of the top cities in the country for vegan living, so it’s the perfect setting for this festival,” said Caitlin Campbell, Community Outreach Manager at Brother Wolf Animal Rescue. “At Brother Wolf, we extend our circle of compassion to all animals—dogs, cats, pigs, cows, chickens, rabbits, etc. We’re spreading the joy of compassionate living to our community, and offering an educational experience for folks who are interested in learning more about plant-based living.”

Plant-based living is on the rise. A 2016 national online poll conducted by Harris Poll and
commissioned by The Vegetarian Resource Group estimated 3.7 million U.S. adults are vegan. Google searches for the term “vegan” increased by 32 percent in the past year. According to a recent study by Wakefield Research, 55 percent of Americans plan to eat more plant-based foods this year. Asheville VeganFest Pre-party Kick-off Asheville VeganFest weekend by attending a pre-party on Friday, June 9, at THE BLOCK off Biltmore, 39 S. Market Street, from 6-9 p.m. Mix and mingle with VeganFest guest speakers and attendees. The pre-party is free and open to the public. Asheville VeganFest SpeakerFest Guest speakers from around the world will be present to tackle the latest issues within the vegan movement through panel discussions Saturday, June 10, at the Asheville Masonic Temple, 80 Broadway Street, from 10 a.m.-6:15 p.m. SpeakerFest is free and open to the public. Eunice Wong is an award-winning actor, writer and editor. She wrote “The Sustainability Secret” and “What the Health.” Craig Holliday is a Satsang teacher, vegan, spiritual activist and licensed professional counselor. James Aspey is an Australian animal activist who recently took a one-year vow of silence to raise awareness for animals.

Gary Francione is known for his work on animal rights theory, and in 1989, was the first academic to teach it in an American law school. Wayne Hsiung is a lawyer, writer and founding organizer for DxE; a behavioral science grad of U. of Chicago and MIT; and a social justice campaign organizer. Ren Hurst is a former professional horse trainer and hoof care specialist, and founder/president of the New World Sanctuary Foundation. Chris Hedges is a Pulitzer Prize-winning journalist, professor at Princeton, author of several New York Times best-sellers and Presbyterian minister. Josh LaJaunie is plant-based ultra-runner who spends most of his waking moments pounding the drum of plants and swinging a giant sledge hammer at current health/nutrition paradigms. Casey Taft is co-owner of Vegan Publishers, a vegan-themed publishing company, who sees the prevention of violence towards non-human animals as a natural extension of his interpersonal violence work. Eugene Cooke is an urban agriculture expert and co-founder of Grow Where You Are, an Atlanta-based non-profit developing local veganic food systems. Ashley Capps is a writer, editor and researcher specializing in farmed animal welfare and vegan advocacy.

Plant, one of Asheville’s best vegan restaurants, will offer food for sale during SpeakerFest. Plant recognizes the intrinsic value of all life and acknowledges that all non-human animals are individuals with inherent worth, not to be exploited by humans. Read speaker biographies at https://veganfest.bwar.org/speakers. Visit https://veganfest.bwar.org/event-schedule for the SpeakerFest schedule.

Asheville VeganFest Veg Speed Date
Single and looking for your plant-based soulmate? Sign up for a session of Veg Speed Date on Saturday, June 10, at the Asheville Masonic Temple, 80 Broadway St., from 4:30-6 p.m. This event is limited to 20 participants (21 years old and older). To purchase tickets, visit https://vegspeeddate.com/event/158122

Asheville VeganFest “What the Health” Film Screening
Attend a screening of “What the Health,” followed by a Q&A session with Eunice Wong, on Saturday, June 10, at the Asheville Masonic Temple, 80 Broadway Street, from 7:30-10 p.m. The screening is free and open to the public.

More food trucks than ever before will be present including Grateful Roots, Gypsy Queen, Smash Box, Vitamina T, Le Bon Cafe and Farm to Fender. All food trucks will be serving a full vegan menu. For the full list of vendors, visit https://veganfest.bwar.org/vendors.

Visit https://veganfest.bwar.org/event-schedule for the speaker schedule. Asheville VeganFest is sponsored by A Well-Fed World and Hilton Garden Inn Asheville Downtown. All proceeds benefit the Brother Wolf Animal Sanctuary. Visit veganfest.bwar.org for all event details.
Posted by Asheville Chamber at 3:04 PM