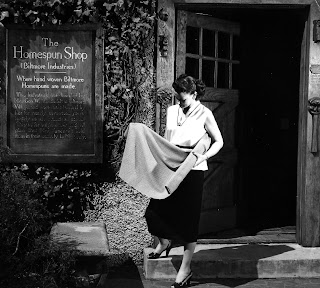 2017 marks the 100th anniversary of Biltmore Industries’ home at Grovewood Village in Asheville! A centennial celebration will take place Saturday, June 17 from 12 - 5pm, which will include a special exhibition of fiber art by 7 regional weavers, artist demonstrations, guided history tours, a cake cutting ceremony, and a historical presentation by Bruce Johnson (2pm) - Director of the National Arts & Crafts Conference at The Grove Park Inn since 1988.

When Biltmore’s first lady, Edith Vanderbilt, approached Fred Seely, visionary of The Grove Park Inn and the son-in-law of Edwin W. Grove, about buying Biltmore Estate Industries in 1917, she asked that he “continue its educational features and develop the arts.”

With Seely’s assurance and agreement to erect six English cottages adjacent to the hotel to house the Industries’ wood carvers and weavers, Mrs. Vanderbilt knew the current eight looms of her Biltmore Estate Industries in Biltmore Village would have a new home and place to grow and thrive. The enterprise became Biltmore Industries.

The diligent work and dedication begun in 1901 by Eleanor Vance and Charlotte Yale, two progressive missionaries who came to Appalachia to encourage self-sufficiency in the mountains, had been supported by the Vanderbilts, who provided funds for a learning trip to Scotland and later looms and woodcarving tools. But the eight looms in Biltmore Village were no longer sufficient. 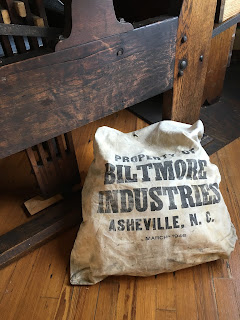 Seely was a known and respected leader and entrepreneur. His new cottages were soon a flurry of activity with a total of 40 looms in operation by 1920 and ultimately Biltmore Handwoven Homespun became known as the finest handmade woolen cloth in the world, worn by Grace and Calvin Coolidge, Thomas Edison, Henry Ford, Herbert Hoover, Helen Keller, John D. Rockefeller, Eleanor Roosevelt, to name a few.

The weaving business thrived until Seely’s death in 1942, when his son took over management. But the demand for handwoven woolen homespun diminished with the onset of modern industrialization. Asheville businessman Harry Blomberg purchased Biltmore Industries in 1953 and provided the resources and leadership that kept the looms in operation until 1981. When Blomberg died in 1991, ownership of Biltmore Industries was transferred to Blomberg’s daughters – Barbara Blomberg and Marilyn Patton, along with his son-in-law, Buddy Patton.