Registration open for RiverLink's 2015 Anything That Floats parade


Registration is open for RiverLink's Anything That Floats Parade to be held on Saturday, August 8, 2015 on the French Broad River in Asheville. Join RiverLink for the wildest, wackiest event of the summer. Creating and building a raft, float or flotilla with fun-loving friends, family or co-workers is not only a grand excuse to hang out and play on the river, it's also a unique chance to have a blast while showcasing mind-blowing creativity in a friendly competition. 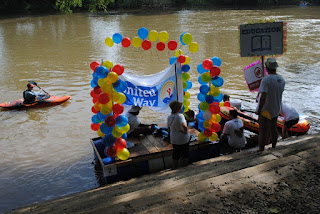 Judges will select a winner in each of the four categories: 1. Most Creative - clever and imaginative, 2.Green Machine - best use of recycled and green materials, 3.Funniest - generates the most laughter and 4. Judge's Choice - overall best in parade.


Registration, fees and details are at: www.riverlink.org/sign-now-anything-floats-parade/. Don't forget your costumes!
The Anything That Floats Parade is a featured event of RiverFest 2015 held at French Broad River Park from 1 p.m. to 7 p.m. The festival has an exciting line-up of live music, dancing, face painting, and hooping along with food trucks, craft beers, a kid's parade and arts and crafts. Admission is free. Be sure to stop by the viewing platform at French Broad River Park to cheer on the parade rafters.
RiverLink hosts the Anything That Floats Parade and RiverFest as fundraisers to support their efforts in the environmental and economic revitalization of the French Broad River as a place to live, work and play.

Posted by Asheville Chamber at 11:34 AM