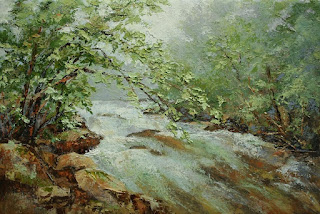 Asheville Gallery of Art’s April show, “The Nature of Things,” will feature the work of new member artists, Tebbé Davis, Mark Harmon, t.e. siewert, and Kate Thayer. This will be the second show in AGA’s new gallery space at 82 Patton Avenue. The artists will present works that highlight their diverse styles as they each interpret their view of the natural world. 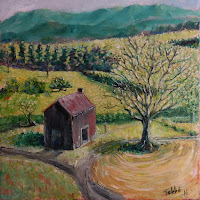 Tebbé Davis paints landscapes and abstract paintings that focus primarily on the textures and colors of the southern Appalachians and the Carolina seashore. He uses color, texture, and composition in each scene to convey the intense beauty he perceives as an artist. “I invite the viewer to explore a world far removed from their everyday existence to an inner journey of the soul,” he states.

Mark Hamon says the very texture of the Smoky Mountains, the weathered rock faces covered by lichens and mosses, inspire his work. He states that lichens were the first organisms to colonize dry land some 700 million years ago, which began the slow process of creating soils that made life on land possible. Of his paintings, Harmon says, “These works speak of the frailty and resilience of life in the form of beautiful compositions that capture the very nature of things often ignored.”

t.e. siewert claims it’s never too late to be what you might have been. “In my fifth decade of life that saying has never been so true as I become the artist I was meant to be,” she states. Siewert works in encaustic, a hot wax technique. The depth of the colored wax layers and sheen achievable using that medium allows her to create nature scenes that are characteristically full of light and poetry. Her work reflects her love of the Western North Carolina mountains where she says, “The air is fresh, the streams are clear, and the people are down-to-earth.”

Kate Thayer states, “As a painter, my aim has always been that of attempting to kindle in the viewer the same kind of emotional exhilaration that I experience when I am seduced by a scene that asks to be brought to life in pastel or oils.” She says she thinks of her paintings as poems, those wordless encounters with the often stunning voices of nature whose colors and forms we rarely notice. “I want to bring to you, the viewer, what you may not have noticed in this busy world of ours: a time to stop and breathe in through our eyes the sweet and compelling voices of nature,” she states.

“The Nature of Things” runs from April 1 through 30. The public is cordially invited to meet the artists at a reception on Friday, April 1, from 5 to 8 p.m. Their work and that of the other 26 gallery members will be on display and for sale through the month during regular hours. The gallery is located at 82 Patton Avenue, Capital Center, in downtown Asheville, across from Pritchard Park.
Posted by Asheville Chamber at 12:08 PM