A brand new scholarship program, the new Emerging Artists program is a part of the Y.E.S. Fund and supports young performers by providing scholarships for graduating high school seniors pursuing a career in the performing arts. There were 14 applicants to the inaugural Emerging Artist Fund scholarship in 2016, and this year’s two scholarship winners will be showcased during the stephaniesĭd performance on May 1st.

A stephaniesĭd performance has been described as a multi-faceted artistic experience that is always full of surprises. The show is connective, soulful, positive, and at times emotionally intense. Audience members are encouraged to not only watch the show, but also become an integral part. 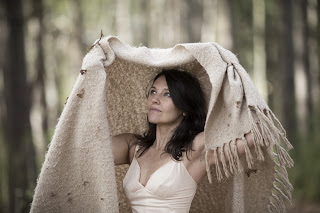 stephaniesĭd vocalist Stephanie Morgan and pianist Chuck Lichtenberger are particularly interested in music education, beginning at the youngest level. In addition to their work with stephaniesĭd, the two have contributed to the musical careers of hundreds of young artists. Chuck Lichtenberger has taught piano lessons to children in the Asheville area since 1995. Many of his students have gone on to study music at renowned university music programs. Stephanie Morgan began her career in social work, helping emotionally traumatized kids through a wilderness therapy program, and later, counseling families through the process of fostering and adoption. She also teaches private lessons to students with an emphasis on helping them “find their voice.”

“Crowd Favorite” winner at the 2015 Music Video Asheville Awards, stephaniesĭd has been promoting its fifth full-length album, Excavator. Best known for its outstanding mix of songs and highly original tunes, stephaniesĭd’s music ranges from deftly focused, emotionally charged journeys to infectious dance tunes, reflecting the band’s ability to bounce from pop to rock, or even to ballad-like melodies, in one show.

Some of the stephaniesĭd’s most popular songs have appeared in episodes of Showtime’s Nurse Jackie, the Weather Channel specials, and numerous films. “Hey Hey Hey” was featured in an Italian jewelry commercial and will appear in an upcoming Sony horror video game during a slasher scene. “Unmistakably Love” was featured by Paste Magazine and selected by Shirley Manson in a contest for Bust magazine.

About the band: Vocalist Stephanie Morgan is the charismatic lead singer and songwriter for stephaniesĭd. After spending nearly a decade as a jazz singer, she began pursuing her own original music, and now relishes touring with stephaniesĭd. Her dynamic voice and contagious stage performance make each show unique. Musical director Charles “Chuck” Lichtenberger is a seasoned jazz pianist with a B.A. in Classical Music from UNC-Asheville. His role on stage is to root the band in the rich blend of textures that spring from his broad musical background. When he’s not on the road with stephaniesĭd, he hosts a weekly jazz jam and teaches piano. Drummer Tim Haney is an American-born Irishman. His considerable chops for jazz and odd-metered styles act as overtones atop more accessible, deep-pocket grooves based in a heart of rock and roll. Joining the band for the May 1st performance at Diana Wortham Theatre are Georgia Sinko on cello and Sarah Hurd on violin.

About the Youth Education Scholarship (Y.E.S.) Fund: The Y.E.S. Fund supports underserved children by providing tickets to Diana Wortham Theatre’s Matinee Series for Students and Families, the theatre’s school programming series. The Y.E.S. program expanded in 2015 to cover artist workshops in local schools and the Emerging Artists Fund. Donations to the Y.E.S. Fund and its programs are accepted any time; more information at www.dwtheatre.com/Y-E-S-Fund.

The entrance for the Diana Wortham Theatre is marked by the location of the theatre’s marquee between 12 and 14 Biltmore Avenue. Patrons enter the theatre through the breezeway between Marble Slab Creamery and White Duck Taco, and into a large interior courtyard with multiple glass doors to the theatre’s main lobby and box office. The intimate theatre seats just over 500 and boasts exceptional acoustics and sightlines, making it the premier performance space in Western North Carolina. The Mainstage Series is supported by a grant from the North Carolina Arts Council, a state agency. The Mainstage Series 2015/2016 Season Sponsors are the Asheville Scene, Blue Moon Water, Creative Energy, and Gourmet-to-go, the North Carolina Arts Council, and the Renaissance Asheville Hotel. To obtain more information on the Mainstage Series or to purchase tickets, call the theatre’s box office at (828) 257-4530 or visit www.dwtheatre.com.

Posted by Asheville Chamber at 11:45 AM