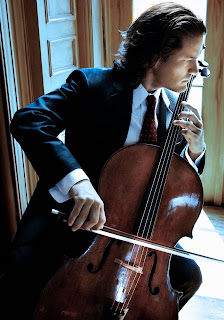 Internationally renowned cellist Zuill Bailey returns to Thomas Wolfe Auditorium on Saturday, May 14, to perform a piece written specifically for him as the Asheville Symphony Orchestra closes its 55th season.

Bailey, who last appeared with the Asheville Symphony in September 2009, joins the ASO for the 8 p.m. concert under the direction of ASO Music Director and Conductor Daniel Meyer. He will perform Michael Daugherty’s Tales of Hemingway, a new work that the ASO co-commissioned for Bailey with a consortium of other orchestras from across the country.

“Based on the fascinating life of the great American author, this new cello concerto will most certainly display Zuill’s superb technique and his innate flair for the dramatic,” Meyer said. “The final movement, titled ‘The Sun Also Rises,’ artfully evokes Spain and its famed matadors as the soloist strums his instrument like a guitar.”

Bailey has performed with symphony orchestras worldwide, including Los Angeles, Chicago, San Francisco, Detroit, Honolulu, Milwaukee, Nashville, Toronto, Israel, Cape Town, and the Bruchner Orchestra in Linz, Austria. He has collaborated with such conductors as Itzhak Perlman and Alan Gilbert, and has been featured with musical luminaries Leon Fleisher, Jaime Laredo, the Juilliard String Quartet, Lynn Harrell, and Janos Starker.

The concert opens with Weber’s Der Freischütz Overture. “Packed with important musical moments from this Romantic opera, this music manages to combine a jaunty hunter’s chorus with secrets from deep within the Wolf’s Glen and finish with a celebration of a heroine’s enduring love,” Meyer said.

The ASO closes its season with Dvořák’s Symphony No. 9 “From the New World,” a piece inspired by the composer’s life and activity in America.

“Dvořák pointed the way to the future of American music by insisting that composers tap into America’s rich Native American and African American cultures,” said Meyer. “His own example, Symphony No. 9 ‘From the New World,’ did just that, incorporating spiritual-tinged melodies, The Song of Hiawatha, and an exuberant finale that sweeps you away with its bold confidence.”