For the fifth year in a row, Asheville Community Theatre will hold their annual event Costume Drama: A Fashion Show, Asheville’s most unique fashion show. This eclectic evening of inventive fashion has quickly become one of the highlights of the Asheville event calendar and sells out every year! Local designers compete for cash prizes in this Project Runway-esque show, and proceeds from tickets benefit the theatre. 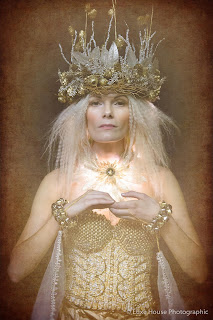 Costume Drama: A Fashion Show will be held Friday, July 8 at 7:30 pm at the Renaissance Hotel. Preferred Seating tickets are $50.00 and general admission tickets are $35.00 and are available over the phone, online, or in person at the Asheville Community Theatre Box Office at 35 East Walnut St. in downtown Asheville.

“This event has grown exponentially every year,” said Susan Harper, Executive Director of Asheville Community Theatre. “We’ve moved the event next door to the Renaissance in order to accommodate the larger crowd and the increase in number of designers.”

Costume Drama: A Fashion Show lets the audience decide on the winners of each category. Local designers choose a themed category and create wearable art using elements from that category. This year’s design categories include two new categories “Artistic License” and “Plastic” as well as two past favorites “Paper” and “Light.” Audience members choose category winners and Best in Show Design by ballot. Winning designers receive cash prizes, and their garments are displayed in the window of Bellagio Everyday on Biltmore Ave.

“Seeing my dress onstage last year was like a dream. I could not believe that the dress I had sketched months ago was actually on a model walking down the runway,” said Lopez. “I struggled a lot during the construction process, because I had never done anything like this before. For the most part I had only worked with fabric. Making the glove dress pushed me to think further out of the box than I ever had before, and lead to many hours of tearing my hair out in frustration. However, it was all worth it in the end, because I was so incredibly proud of my creation. It taught me to never let fear or the unknown hold me back and to turn it into something beautiful instead.”

The ticket price includes a pre-show party with champagne and canapés beginning at 6:00 pm and a silent auction – where, among other items, selected garments from the show will be available for bids.

Costume Drama: A Fashion Show is directed by Sara Fields. In addition to matching models with designers, Sara coordinates a volunteer team of local hair and make-up artists, photographers, and videographers.

What: Costume Drama: A Fashion Show