From a beginning in Asheville Community Theatre’s Tanglewood program to a career as a comedian, writer, director, and actor, Asheville native Jim David has traveled the world, performed for thousands, and headlined a half hour special on Comedy Central. He returns to Asheville for a one-night-only benefit performance Stand Up for Equality (And Show Tunes!) on Thursday, June 23 at 7:30 pm. All profits from Stand Up for Equality (And Show Tunes!) will go to Equality NC, the statewide civil rights nonprofit working for equality for the LGBT community, and Asheville Community Theatre. Tickets are $25.00 and are available online at www.ashevilletheatre.org, over the phone at 828-254-1320, or in person at the Asheville Community Theatre Box Office. 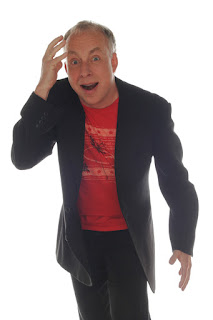 Jim David is the first openly gay man to have his own special on Comedy Central, Comedy Central Presents Jim David. He has appeared on The Tonight Show with Jay Leno, ABC’s The View, HLN’s The Joy Behar Show, Comedy Central’s Tough Crowd With Colin Quinn, the variety special Out on the Edge, as a guest ‘comedy consultant” on Bravo’s Queer Eye for the Straight Guy, and has appeared on Comedy Central, NBC, A&E, Bravo, MTV, VH1, and Showtime. Jim has appeared on and off Broadway, in films and commercials, and many comedy festivals including HBO US Comedy Arts, TBS Las Vegas and Montreal Just for Laughs. His one-man comedy South Pathetic was produced to raves at the New York International Fringe Festival and many regional theaters – as well as at Asheville Community Theatre! Jim also produced Comedy Cares, the stand-up comedy benefit for Broadway Cares/Equity Fights AIDS.

He is a contributor to Huffington Post and Edge On The Net, and is heard frequently on “Tell Me Everything With John Fugelsang” Sirius XM Insight radio. He is the author of a comic novel about showbiz, You’ll Be Swell, available on Amazon. His Comedy Central special and four CDs - Eat Here and Get Gas, Live From Jimville, Notorious F.A.G., and Hard To Swallow - are available for download on iTunes.

Like so many, he was outraged by the passage of the discriminatory law HB2 in his beloved home state, and is happy to be doing his part raising money for Equality NC as well as his beloved ACT.

AT A GLANCE
What: Stand Up for Equality (And Show Tunes!), a benefit for Equality NC and Asheville Community Theatre