Scott Treadway and Charlie Flynn-McIver are back on stage together in Don’t Dress for Dinner.

Don’t Dress for Dinner is the sequel to Boeing Boeing

North Carolina Stage Company (NC Stage) is excited to announce the production of Don’t Dress for Dinner in November and December of 2014. 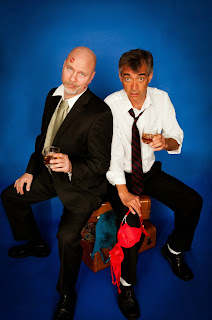 Bernard (Flynn-McIver) is at it again. He makes big plans for a romantic rendezvous with his mistress complete with a solid alibi from his friend Robert (Treadway). Everything is perfect.  Until. Bernard’s wife decides to stick around for a tryst of her own. The cook is Suzette, the lover is Suzanne, the wife smells trouble, and the friend is bewildered. One twist leads to another as the men in this fast-paced farce work hard to keep up appearances.  Also starring Jennifer Gatti, Alice Eacho, Trinity Smith, and Strother Stringley.  The production is directed by Neela Munõz who has directed several other productions with NC Stage including the prequel, Boeing Boeing, at NC Stage in 2011.

Of the collaboration Charlie Flynn-McIver says, “Boeing Boeing was one of our most beloved shows at NC Stage and it is really exciting to be working with Scott in the sequel.  We hope our audiences will be delighted again with this new tryst and all the antics that this cast of characters delivers.”

Scott and Charlie were recently voted the top two actors in the Best of Mountain Xpress poll.  They have enjoyed a long history on stage together and are thrilled to collaborate again.  The pair performed together in July 2014 at Flat Rock Playhouse in Boeing Boeing, the prequel to Don’t Dress for Dinner.

North Carolina Stage Company is Asheville’s only professional equity theatre celebrating its 13th year producing plays for the Asheville community.  Founded by Charlie and Angie Flynn-McIver, the theatre has been voted best local theatre 9 out of the past 10 years in the Mountain Xpress Best of WNC Poll.  NC Stage was also recently awarded the American Theatre Wing National Theatre Company Grant.

Tickets are available by calling 828-239-0263 or visiting us online at ncstage.org
Posted by Asheville Chamber at 10:53 AM