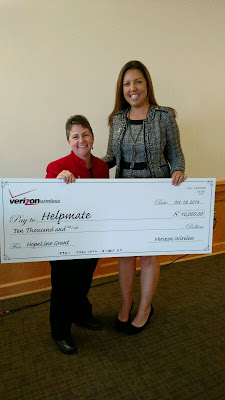 Verizon Wireless recently called on the community in Buncombe County to join them in supporting Helpmate[1], a crisis-service provider for survivors of domestic violence. The community raised $10,000 and Verizon’s HopeLine program matched it. The $20,000 raised during Domestic Violence Awareness Month will fund victim services.

“Verizon Wireless is proud to participate in this community’s passion to end domestic violence,” said Sarah Schneider, district manager for Verizon, who presented the matching donation at Helpmate’s Domestic Violence Awareness Vigil Tuesday at A-B Tech. “With this donation we hope to be one step closer to ending the cycle of domestic violence throughout Buncombe County.”

“We are overjoyed that our community has stepped up to help us raise $20,000,” said April Burgess-Johnson, executive director of Helpmate. “With this money, we will be able to help even more survivors of domestic violence receive the services and care they need to heal and move on with their lives.”

Organizations in Buncombe County, including Helpmate, have partnered through the eNOugh Campaign[2], which combines law enforcement, civic groups and domestic violence experts in an effort to align resources and decrease the number of domestic violence-related deaths in western North Carolina.
Posted by Asheville Chamber at 10:07 AM