Local entrepreneur is committed to the Asheville area


National Wiper Alliance, Inc. and Nonwovens of America, Inc. have just celebrated their one year anniversary of moving into the 500,000 sq. ft. Charles D. Owen manufacturing plant, once known as the largest blanket manufacturer in the world, in Swannanoa. This is a great honor for local resident and entrepreneur, Jeff Slosman, who started his venture in 1996. From home equity loan to a half a million square foot facility, this local entrepreneur gets international recognition and is featured on the cover of Nonwovens Industry Magazine, October issue. 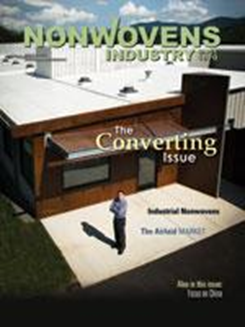 In 1996, Slosman, a 3rd generation Ashevillian left the family business that had been in Biltmore since the 1940’s by taking out a home equity loan and venturing out himself. The success of the business he started, National Wiper Alliance (NWA), has been remarkable.  The company’s continued success and need for space to grow required the purchase of the Charles D. Owen blanket factory located in Swannanoa from Springs Global in 2012.  At the time of the purchase, the building was in rough shape. After a full year of work, many locals say the building looks better than it did when it was originally built. Not only are the locals taking notice, so is the Nonwovens Industry.

When Slosman founded National Wiper Alliance, its main focus was on recycling nonwoven materials and converting them into wipes for industrial customers.  Over the years, the business has grown into one of the largest convertors in the country focusing on converting nonwovens for dry wipes and floor pads for medical, food service, automotive, aerospace and retail customers both domestically and abroad.

Upon the purchase of the new site, it came with equipment that the previous owners used to make blankets. Not only was the equipment there already, but also the knowledge and expertise of the local workforce. While other companies continue to outsource to other countries, Slosman was dedicated to keep the equipment and put it to use. He founded Nonwovens of America (NOA) and hired back half of the workers that were laid off when the factory closed. The timing for the venture could not have been better. The first year saw Hurricane Sandy hit the North East and a need for blankets began. A multi-year contract to supply The American Red Cross their blankets became the first work for the new business. “The resolve of the Red Cross to buy American truly was a win-win relationship for the two companies,” says Slosman. The fiber NOA purchases to make the blankets are very “green”. It comes from bottle flakes which are made from recycled plastic drinking bottles and are then made into blankets in Swannanoa, to be used by the Red Cross to help those when they are in crisis.  The blanket has become synonymous with offering comfort to those at a time when they need it most.

Recently, National Wiper Alliance and the updated plant were featured on the front cover of the Industry magazine which has an international readership. “This is an honor for the company and our workers and would not have been possible if not for the dedication of our workforce,” stated Slosman. Also featured in the magazine is a one on one interview with Slosman.

National Wiper Alliance and Nonwovens of America thank Asheville and the Swannanoa communities for their support. “I take pride in giving back to the community through volunteering, partnerships, sponsorships, jobs, etc. because this is a deserving community. Many local citizens may not know what we do but they do know we are here and we plan to stay, this is our home,” stated Jeff.
Posted by Asheville Chamber at 9:14 AM