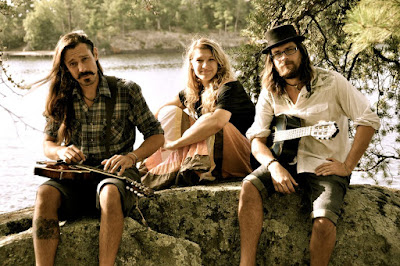 Canadian roots trio Red Moon Road takes the stage at Diana Wortham Theatre on Friday, September 25, 2015 at 8:00 p.m. Inspired by the great outdoors, this endearing and modern band joins Asheville audiences from folk festivals all over Canada and parts of the United States.

Red Moon Road’s musicians joined together from polar opposite musical backgrounds; Daniel Jordan hails from jazz training, while Daniel Peloquin-Hopfner is a bilingual prog-rock vet. The Winnipeg band’s lead singer, Sheena Rattai, grew up singing in church choirs and then fronted a funk band before teaming up with her band mates to create the mellow tones of a modern folk group. It is the special skillset each musician brings from past experiences that makes Red Moon Road unique among its peers: the delay pedal in the middle of an acoustic set, or a loop track to lock the rhythm down. And though the trappings of the band may speak of backwoods – they’ve been known to take the stage with pinecones in their hair – there is still the steady flow of pop and jazz to accentuate the finer points of Red Moon Road’s story-telling melodies.

The band’s self-titled debut album was met with praise, as was its latest EP, Tales from the Whiteshell. The combinations of mandolin, guitar, fiddle, and banjo behind Rattai’s twilight voice have propelled it forward from fireplaces to festivals, and now to Diana Wortham Theatre’s welcoming stage.

The entrance for the Diana Wortham Theatre is marked by the location of the theatre’s marquee between 12 and 14 Biltmore Avenue. Patrons enter the theatre through the breezeway between Marble Slab Creamery and White Duck Taco, and into a large interior courtyard with multiple glass doors to the theatre’s main lobby and box office. The intimate theatre seats just over 500 and boasts exceptional acoustics and sightlines, making it the premier performance space in Western North Carolina. The Mainstage Series is supported by a grant from the North Carolina Arts Council, a state agency. The Mainstage Series 2015/2016 Season Sponsors are the Asheville Scene, Blue Moon Water, Creative Energy, 67 Biltmore Downtown Eatery and Catering, the North Carolina Arts Council, and the Renaissance Asheville Hotel. To obtain more information on the Mainstage Series or to purchase tickets, call the theatre’s box office at (828) 257-4530 or visit www.dwtheatre.com.

Posted by Asheville Chamber at 9:18 AM