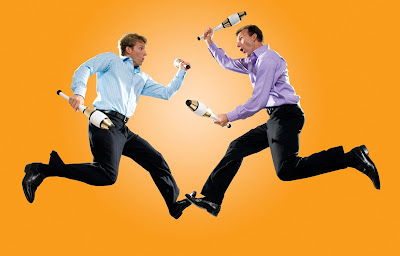 As seen on America’s Got Talent, The Tonight Show, and NBC’s Today, The Passing Zone, comprised of jugglers Jon Wee and Owen Morse, brings the comedic and daring talent that set five Guinness World Records and won eighteen gold medals to Diana Wortham Theatre on Saturday, October 3 at 8:00 p.m. for a family-friendly evening of suspended gravity, good-natured ribbing, and juggling chainsaws!

The edgy and spectacular action of the duo’s show, The Passing Zone Saves the World, is peppered by witty improvisation and includes the use of Segways, “as-seen-on-TV” items, tights and tutus, and of course, the audience members. Comedy, juggling, and dangerous stunts make up an unforgettable and hilarious experience that this team of over twenty years has honed into an all-inclusive and hugely entertaining act.

Having met at a 1986 juggling convention, Morse and Wee won their first silver medal at the International Jugglers’ Association Teams Competition just two years later. The duo’s first gold medal came one year after that, and since then, the act has been awarded a total of 18 gold medals from the association. The recognition has earned the performers many of their onscreen appearances including multiple stints on The Tonight Show and NBC’s Today, roles as stunt doubles in The Addams Family Movie, and cameos in the award-winning comedy documentary, The Aristocrats.

In addition to the live performances, The Passing Zone was one of ten finalists on NBC’s America’s Got Talent in 2006. They have performed on the Royal Variety Performance at the Dominion Theatre in London, and at the 1995 Miss America Pageant. Morse and Wee have been known to open for renowned comedians such as Bob Newhart, “Weird Al” Yankovic, Bob Hope, and Rita Rudner.

The Passing Zone’s Asheville performance is made possible by Performance Sponsors Ed & Vicki Jenest, Dianne & David Worley, and PNC Bank; and by Special Attractions Series Sponsors Henry LaBrun and BMW of Asheville; with additional support provided by Media Sponsor The Laurel of Asheville.

The entrance for the Diana Wortham Theatre is marked by the location of the theatre’s marquee between 12 and 14 Biltmore Avenue. Patrons enter the theatre through the breezeway between Marble Slab Creamery and White Duck Taco, and into a large interior courtyard with multiple glass doors to the theatre’s main lobby and box office. The intimate theatre seats just over 500 and boasts exceptional acoustics and sightlines, making it the premier performance space in Western North Carolina. The Mainstage Series is supported by a grant from the North Carolina Arts Council, a state agency. The 2015/2016 Mainstage Season Sponsors are the Asheville Scene, Blue Moon Water, Creative Energy, the North Carolina Arts Council, 67 Biltmore Downtown Eatery & Catering, and the Renaissance Asheville Hotel. To obtain more information or to purchase tickets, call the theatre’s box office at (828) 257-4530 or visit www.dwtheatre.com.
Posted by Asheville Chamber at 11:10 AM