Longtime Philadelphia Orchestra concertmaster David Kim will join the Asheville Symphony and Music Director Daniel Meyer on Saturday, Oct. 17, for a Masterworks performance of one of the most beloved violin concertos in the classical canon. 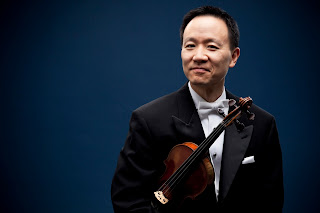 “Bruch’s Violin Concerto with David Kim” will start at 8 p.m. at Thomas Wolfe Auditorium. The Asheville Symphony will also perform Golijov’s “Sidereus” in the first half and Schumann’s Symphony No. 2 in C major, Op. 61 in the second half.


The Philadelphia Orchestra’s concertmaster since 1999, David Kim has performed as a soloist with numerous orchestras around the world and has appeared at international venues including the Brevard Music Center. Highlights of Kim's 2015-16 season include teaching/performance residencies at Oberlin College, Bob Jones University, and The Boston Conservatory of Music, appearances as concertmaster of the All-Star Orchestra on PBS stations across the USA and online at the Kahn Academy; and the launch of the first annual David Kim Orchestral Institute of Cairn University in Philadelphia.


Max Bruch, who was a teacher to composers Ottorino Respighi and Ralph Vaughan Williams, finished the violin concerto in 1866. Renowned violinist Joseph Joachim, a Bruch contemporary, called it the “richest and most seductive” of the Romantic violin concertos.


Golijov’s “Sidereus,” an overture which has been performed all over the world, was inspired by Galileo’s Sidereus Nuncius (Starry Messenger) in which the seventeenth-century astronomer and physicist wrote of his observations of the moon’s surface with the newly invented telescope and, more disturbingly at the time, the discovery of four of the moons of Jupiter. Golijov has said Galileo’s publication pointed to the duality of the moon: “… it is still good for love and lovers and poets, but a scientific observation can lead us to entirely new realizations.”


Schumann’s Second Symphony is noted for its memorable melodies, rich harmonies, and propulsive rhythms. Composed in 1845 at a time when Schumann was recovering from a nervous breakdown, the first three movements are characterized by slow, dark themes, while the fourth is much more joyous – reflecting Schumann’s improved mental state.


Single tickets for all concerts are $22 – $62 depending on seating section; reduced youth pricing is available. Single tickets and season ticket packages can be purchased at www.ashevillesymphony.org, by calling 828-254-7046, or in person at the U.S. Cellular Center box office at 87 Haywood Street.