Gustav Holst’s always popular and captivating orchestral suite The Planets is the featured work on a program of sonic masterpieces as the Asheville Symphony performs its third concert of the season Saturday, November 21.

The musicians of the Asheville Symphony Orchestra will have a chance to shine during both Holst’s ode to the cosmos and Haydn’s Sinfonia concertante, Op. 84, which will be the opening piece on the program under the direction of ASO Music Director and Conductor Daniel Meyer. The concert will begin at 8 p.m. at Thomas Wolfe Auditorium.

The Planets requires the use of a large orchestra – one of the largest that ASO audiences will hear this season – to reflect Holst’s fascination with the scope of our solar system. Each planet, with the exceptions of Earth and Pluto (which at the time Holst composed the work 100 years ago had yet to be classified and then de-classified as a planet) is portrayed in the suite.

“Holst devised an orchestral suite with imaginative musical portraits of the planets, from Mars, the Bringer of War to Neptune, the Mystic, in astounding sonic renderings using a massive orchestra,”
Meyer said. 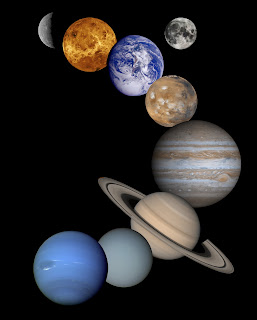 For its monthly program, the Asheville Symphony Guild will host Meyer and astronomer Bernard Arghiere for a discussion about The Planets – both the musical work and the planets themselves – starting at 10 a.m. on Thursday, Nov. 19, at St. Mark’s Lutheran Church in Asheville. The program is free and open to the public.

“Haydn sought to exploit the sonic characteristics of the solo violin, oboe, cello, and bassoon in a concerto,” said Meyer. “Stepping into the spotlight, our own principals will take the solos while the musicians of the ASO provide the charm and zest that makes Haydn’s music so joyous.”

Haydn   Sinfonia concertante, Op. 84
Holst     The Planets
Posted by Asheville Chamber at 10:15 AM