Steve Henry ACDS '86, Kathleen Fidelia Holmes CDS '05, and Andy Sharpe CDS '02 were inducted into the Athletic Hall of Fame Saturday, October 10. Sponsored by the CDS Alumni Association, the Athletic Hall of Fame recognizes members of the Carolina Day School family members who have distinguished themselves as outstanding contributors to athletics at CDS or its predecessor schools, demonstrated good sportsmanship and citizenship character, and left a lasting impression of achievement and excellence on the CDS athletic family. This year’s recipients were chosen from a list of more than two dozen former athletes and coaches nominated by both past and present members of the Carolina Day School community. 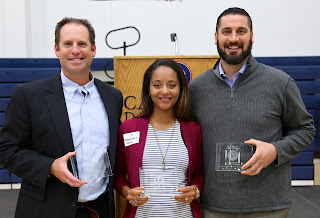 Steve Henry is the Director of Athletics at Carolina Day School. Henry often calls the athletics program “the front porch of the institution” that plays a critical role in the educational experience of the students and the reputation of the school.

“Because of this understanding, Steve pushes his coaches and athletes to grow, be better than they were the day before, always stretching to reach the tape one second faster, while delivering his message with an authentic graciousness, depth of character, and a healthy twinge of acerbic wit,” said Assistant Athletic Director Trip Cogburn CDS ‘98. “Instrumental in the creation of the Play for Your School program in Lower School, Steve has created an athletic culture for our students that is welcoming for all ages and abilities.”

Henry also has extensive athletic and coaching accomplishments, including receiving the Hamilton award for Best Male Senior Athlete at CDS in 1986, the Washburn award for best CDS athlete grades 9-11 in 1985, All-WNC basketball selection in 1986, and multiple year All-Conference selection in basketball, golf, and tennis. He played four years of collegiate basketball at Guilford College for NAIA and NC Hall of Fame basketball coach Jack Jensen. In addition to basketball at Guilford, Henry competed in both golf and tennis. Prior to his arrival at CDS, Henry was a successful athletic director and basketball coach at Warren Wilson College. Since joining CDS, Henry has coached varsity basketball, in which the team went to the state finals and state tournament multiple times. He also coached varsity boys soccer, Middle School boys soccer, Middle School girls soccer, Middle School boys golf, and countless Play for Your School basketball and soccer teams.

Andy Sharpe says he is most proud of his team winning three basketball state champions during his time at Carolina Day School. As one of the leaders of those teams, he was instrumental in helping those teams reach that accomplishment.

“He’s a humble person who most relishes the sense of group success rather than his own personal achievements,” said Cogburn. “Andy is one of the most dominating three sport athletes I’ve ever seen. He didn’t just dominate a single sport and dabble in two others, he was often the best player in the game, regardless of the sport. And yet somehow, he was universally respected and revered by teammates and opponents alike.”

Hill Brown, former Upper School principal and one of Sharpe’s coaches said, “After teaching for 25 years, Andy Sharpe still stands out as one of the most gifted all around athletes I have had the privilege of coaching. From his days in sixth-grade PE, I got to watch him excel in so many areas. Andy somehow managed to find that very difficult balance of being a fierce competitor and at the same time a true gentleman. He was a role model, not only for the younger kids, but for his peers as well. I am fortunate to consider him a friend to this day, and I congratulate him on this well deserved honor.” 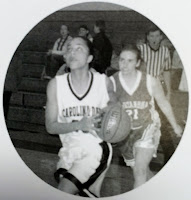 Kathleen Fidelia Holmes - Carolina Day School ‘05
Kathleen Fidelia Holmes is known for her impressive athletic career at Carolina Day and at Wheaton College. Nominations for Holmes for the Athletic Hall of Fame mentioned what kind of person she is, as well as her athletic achievements. Her array of awards includes receiving two Owen awards, the Jackie Gouge Award for Best Senior Female Athlete in 2005, four-time All-State selection in basketball, named to the All-Western Carolina basketball team, scored 1,600 career
points, four-time selection as team MVP, helped lead the team to state runner-up finish in her freshman season and a fourth place finish as a sophomore. Then at Wheaton College, she was the first women's basketball player in the school’s history to record at least 1,250 career points, 450 career rebounds, combined with 300 assists, and 200 career steals. In her senior year, she was first team All-Central selection for women's basketball.

“She was so smooth and made the game look effortless,” said Tim Reid, Holmes’ varsity basketball coach at Carolina Day. “She could hit threes, drive to the basket and draw fouls, find her teammates when they were open, and almost single handedly break any full court press in Western North Carolina. Kathleen was a good friend and teammate. She loved her team and the friends she made on it. She respected her coaches and her opponents.”
Posted by Asheville Chamber at 10:38 AM