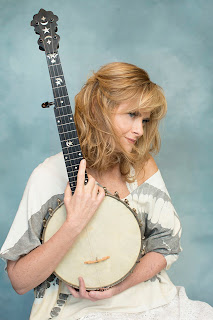 The versatile Alison Brown and her band are back at the Diana Wortham Theatre for a night of beautifully imagined bluegrass, jazz and other genre-crossing tunes on Friday, November 6, 2015, at 8:00 p.m., with old favorites along with selections from Brown’s just-released (October 9, 2015) album, The Song of the Banjo.

Alison Brown has received three Grammy nominations for her solo recordings and one Grammy award in 2001 for “Best Country Instrumental Performance.” Her music has also garnered the International Bluegrass Music Association’s award for “Banjo Player of the Year” (1991). This year, Brown was awarded the IBMA Distinguished Achievement Award, and in 2014, she was granted the United States Artist Fellowship.

Described by Pulse magazine as a “genre-bending banjoist,” Brown and her band manage to incorporate world styles as well as traditional plucking in their music, the result being highly original tunes and creative adaptations of the classics. On this latest album, Brown and her stellar band have mixed seven originals with six surprising covers of pop and rock classics from the ‘70s and ‘80s, including “Dance With Me” and “Time After Time.” The band’s line-up on this tour features the talents of Brown on banjo and guitar, Joe Davidian on the piano, Christian Sedelmyer on the fiddle, Gary West on bass, and Bryon Larrance on drums.

At the age of sixteen, Alison Brown won the Canadian National Banjo Championship, and then recorded an instrumental album with fiddler Stuart Duncan. She later earned an AB degree from Harvard University and an MBA in finance from UCLA, spending two years as an investment banker before returning to music. After touring with Alison Krauss and Union Station, and as bandleader for Michelle Shocked, she formed the Alison Brown Quartet with her husband and Compass Records business partner, Gary West.

The entrance for the Diana Wortham Theatre is marked by the location of the theatre’s marquee between 12 and 14 Biltmore Avenue. Patrons enter the theatre through the breezeway between Marble Slab Creamery and White Duck Taco, and into a large interior courtyard with multiple glass doors to the theatre’s main lobby and box office. The intimate theatre seats just over 500 and boasts exceptional acoustics and sightlines, making it the premier performance space in Western North Carolina. The Mainstage Series is supported by a grant from the North Carolina Arts Council, a state agency. The 2015/2016 Mainstage Season Sponsors are the Asheville Scene, Blue Moon Water, Creative Energy, the North Carolina Arts Council, 67 Biltmore Downtown Eatery & Catering, and the Renaissance Asheville Hotel. To obtain more information or to purchase tickets, call the theatre’s box office at (828) 257-4530 or visit www.dwtheatre.com.

Posted by Asheville Chamber at 10:14 AM