Asheville School’s Robotics team, the BlueBots, competed in the FIRST Tech Challenge (FTC) Qualifying Tournament at Appalachian State in Boone, NC, against fifteen teams on January 31, and qualified for the FTC State Championships.

After successful matches in the qualifying rounds, the team moved into the top four teams of the tournament and advanced to the semi-final rounds. 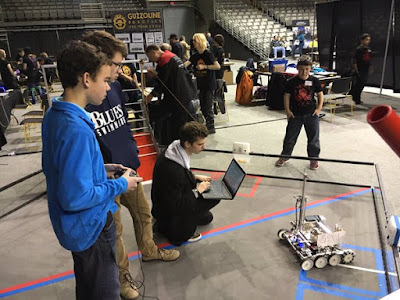 The BlueBots formed an alliance with the third place team, won the semi-finals and moved on to the final round, where the best two out of three wins. The BlueBots won the first round of the finals 130-21, but weren’t able to secure the win. Their placement does qualify them for the FTC State Championships next month at North Carolina A&T State University.
According to their website, “FTC is designed for those who want to compete head to head, using a sports model. Teams of up to 10 students are responsible for designing, building, and programming their robots to compete in an alliance format against other teams. Teams are required to develop strategy and build robots based on sound engineering principles. Awards are given for the competition as for well as for community outreach, design, and other real-world accomplishments.”

The BlueBots also competed at an FTC Qualifying Tournament in Charlotte earlier in the year and took third place.