Hurry – you can get muddy for less, but only until March 14!  The Hunter Subaru Mad Mountain Mud Run, coming June 4 of this year, is open for registration.  And teams save $30 on registration through March 14!  As the Premier Mud Run in Western North Carolina, the 2016 race is slated to be the best yet. 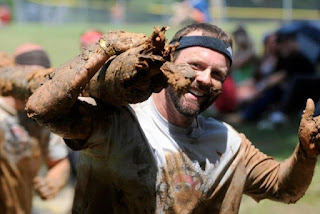 Last year, nearly 1,500 racers of all ages and abilities participated in the one-of-a-kind event that is designed to be fun for competitive racers as well as for people who just want to have a great time.  The event, a 3-plus mile race filled with muddy obstacles, is held at Berkeley Park in Hendersonville, N.C., and is coupled with an all-day festival that offers food, craft beer and live music for racers and spectators.  All proceeds benefit Hendersonville’s children’s museum, Hands On! – A Child’s Gallery.
Teams of four can register on-line at madmountainmudrun.com for $170 through March 14, after which the price increases to $200.  It’s okay if you don’t know exactly who will be on your team, as changes can be made at any time.
“This event has made a name for itself because it is so great for people of all different abilities,” said Heather Boeke, event organizer.  “We organize the race so serious athletes are competing with each other in the first heats of the race, and then later in the day, we see the silly costumes, entire families, and groups of friends who are in it for the fun.  Then we all come together to enjoy a great festival – all to support Hendersonville’s children’s museum, Hands On!, the place where Learning comes into Play.”
The event is made possible in part by these generous sponsors:  Presenting sponsor and Master of Mud – Hunter Subaru; Mad Mudslinger sponsor – Pardee UNC Health Care; Mudtastic Mates Sponsors – City of Hendersonville, Kimberly-Clark, NC Printing, Pace Construction & Demolition, Summit Marketing, 105.9 The Mountain & Lamar Outdoors; and Muddobber sponsor –Mast General Store.
For more information, visit madmountainmudrun.com.
Posted by Asheville Chamber at 9:20 AM