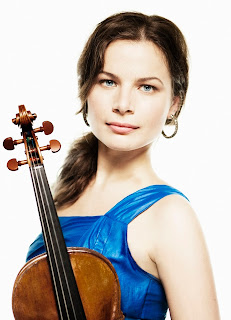 “We’re excited to have Bella Hristova make her ASO debut with Beethoven’s bold and brilliant Violin Concerto,” Meyer said. “A concerto of symphonic proportions, Beethoven’s single entry into the genre remains at the pinnacle of music ever written for the instrument, and this will be an opportunity to hear a great concerto performed by a shooting star.”

Acclaimed for her passionate, powerful performances, beautiful sound, and compelling command of her instrument, Hristova was recently recognized with a prestigious 2013 Avery Fisher Career Grant, given to outstanding instrumentalists and based on excellence alone. The Washington Post’s The Classical Beat has stated she is “a player of impressive power and control.” Her engagements in 2015-16 include the Buffalo Philharmonic, Kansas City Symphony, Delaware Symphony, Vermont Symphony, Erie Philharmonic and Chamber Music Society of Lincoln Center.

Hristova is stepping into the ASO concert in place of Stefan Jackiw, who was originally scheduled to perform the Beethoven Violin Concerto. Jackiw has had to withdraw, with regret, for personal reasons.

The Mendelssohn and Strauss works will be performed during the first half of the concert.
Mendelssohn’s Hebrides Overture, subtitled “Fingal’s Cave,” musically captures the composer’s visit to and impressions of this special archipelago in Scotland.

Crushed by the demise of Germany and its storied cultural history, Strauss composed an elegiac and deeply stirring work for twenty-three solo musicians called Metamorphosen. With its arching, spun lines of intertwined strings and a wistful nod to the funeral march from Beethoven’s Eroica Symphony, Metamorphosen aches for a bygone era of serious but deeply Romantic music.

Single tickets for Beethoven’s Violin Concerto are $22-$62 depending on seating section; reduced youth pricing is available. Single tickets and season ticket packages can be purchased at www.ashevillesymphony.org, by calling 828-254-7046, or in person at the U.S. Cellular Center box office at 87 Haywood Street.