Oh, the Thinks You Can Think! 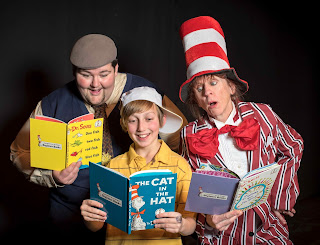 Dr. Seuss’s best-loved storybook characters collide and cavort in Seussical, the next musical onstage at Asheville Community Theatre. Seussical opens February 12, 2016 and runs through March 6, 2016 with performances Friday and Saturday nights at 7:30 pm and Sunday afternoons at 2:30 pm. Tickets are available online at www.ashevilletheatre.org, over the phone at 828-254-1320, or in person at the Asheville Community Theatre Box Office.

The Cat in the Hat is the host and emcee (and all-around mischief-maker) in this romp through the Seuss classics. Seussical is an incredible crazy-quilt adventure that champions the power of imagination and the benefits of inclusivity! Asheville Community Theatre’s production of Seussical is directed by Mark Jones who most recently helmed ACT’s musical hit The Great American Trailer Park Musical. Musical direction is by Sarah Fowler.

Colby Coren plays Horton the Elephant and is making his ACT debut; in fact, Seussical is the first show he’s ever auditioned for at ACT. “Dr. Seuss has been near and dear to my heart as long as I can remember. In fact, when I graduated high school, my parents gave me a copy of "Oh the Thinks you Can Think" as I headed off to college. I even wrote my first college English paper on the book,” says Colby. “However, it was the persistence of my dear friend, Jessica (who plays Mrs. Mayor) pushing me to go for it that finally made me take the leap and audition. I am so glad I did!”

Trissa King (Cat in the Hat) just moved to Asheville in July. She holds a Masters Degree in Music and performed all over the country, but then took a 30 year break from theatre. Seussical marks her first time on the stage since the 1980s. “It is the rehearsal process that I love the most. Yes, getting the show up and running is good; but it is the process where the growth is nurtured and learning takes place ... not only personally, but also as a company,” says Trissa. “Getting to know people is a joy for me!”

Ethan Suess (Jojo) is a 6th grader at Carolina Day School who is also making his Mainstage debut. Ethan has been in many ACT Youth Production Classes, most recently as Conrad Birdie in Bye Bye Birdie, Jr. And though his last name is spelled slightly different than Dr. Seuss’, it’s pronounced the same way.

They are joined onstage by 15 other cast members, including many ACT veterans as well as other newcomers to the ACT stage.

For more information about Seussical or about Asheville Community Theatre, please visit www.ashevilletheatre.org.
Posted by Asheville Chamber at 9:24 AM