Early this summer, 2016, National Wiper Alliance President Jeff Slosman accepted the fourth award within a year on the behalf of his company. Presented by the Wake Forest Center for Private Business at the Annual Family Business of the Year awards, Slosman representing his National Wiper Alliance team was presented with the NC Family Business of the Year award in the large business category. 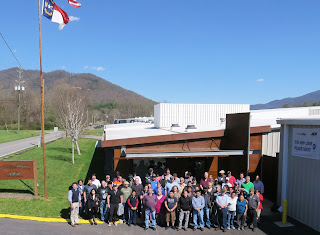 “Recognition as the Family Business of the Year affirms our commitment to the family values that have been a part of the foundation of the business from the beginning”, Slosman responded when asked about receiving the award. The award acknowledges family-owned companies, their accomplishments and their commitment to community. In addition to judging company’s success, it also takes into account their innovative strategies along with practices instrumental in their growth and development. This award comes following National Wiper Alliance’s most recent achievement of being recognized as Business NC Magazine’s Small Business of the Year, December, 2015.  Also in 2015, Slosman accepted an invitation to visit the White House resulting from his commendation as SBA’s NC Small Business Person of the Year.  National Wiper Alliance also received honorable mention as NC Chamber of Commerce Manufacturer of the Year in 2015.

National Wiper Alliance began in 1996 with Jeff, his wife, and grandfather filling orders out of a borrowed warehouse of 2,000 square feet. Twenty years later, National Wiper Alliance operates out of a half-million square foot complex with more than 100 employees. Scott Daugherty, director of the NC Small Business and Technology Development Center praised National Wiper Alliance at the SBA event saying, “This is not rocket ships, there’s no glitz or glamour, but they’ve built one heck of a successful growth business.”

The Family Business of the Year award was given by the Wake Forest Center for Private Business, an organization that was established in 1999 by Dr. Stan Mandel and headquartered in Wake Forest, NC. Their mission statement reads, “The Center for Private Business enables privately owned businesses to achieve dreams for their business, family, employees, community and stakeholders by providing access to industry leaders, resources, networks and education.” WFCPB was recently able to expand and increase its staff and resources to better enable them to aid in the growth of the businesses associated with them.

To learn more about the Wake Forest Center for Private Business, visit http://cpb.wfu.edu

Posted by Asheville Chamber at 1:18 PM